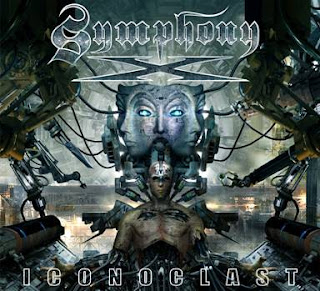 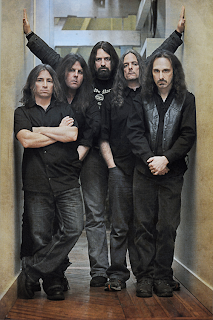 Symphony X is one of those bands that I grew up with, my dad really introduced me to the whole prog-metal genre, so these guys have been in my life for a while. In recent years it's been nice to see them getting not only more support and press, but also increase in heaviness. Upon seeing them get signed to Nuclear Blast, I was like, "Finally," maybe now more people will begin to appreciate these guys.
What I really get irked at is when people just lump Symphony X into the rest of the prog-metal scene, or discount them as just another band that likes to show off how technical they can play, because that's never been the case. Sure, they have long and adventurous songs and make use of long instrumental passages, but the focus has always been more on the song than the virtuosity of the players. The ability to write a memorable riff or hook is apparently more important than just soloing for several minutes at a time, Heretic or Electric Messiah. In addition to that, vocalist Russel Allen is one of the standout vocalists within the prog/power metal scene, and has been for at least the last decade. I feel that his vocal style, and tone, really just has more of that classic 70/80's hard rock quality to it that just brings a whole new dynamic to this band than their contemporaries.
I remember reading a comment that had said that "Paradise Lost" was much more of a groove based prog-metal album, where this one has a more technical thrash vibe to it, and I found that statement to be very true. The riffing on this album is certainly more frantic and fast paced, Bastards of The Machine, than on previous discs but still retains that same sort of melodic quality to it that can only be found with this band. It's certainly the band's most aggressive record yet, with most tracks showcasing the band's metal side. In a sense, one could see this record as less adventurous simply because it is a metal record, you don't have the variety or epic long songs that were on albums like "The Odyssey," but I think in exchange you're getting a much more catchy and hook-laden record that turns out to be more memorable and suitable for a live environment. Despite all that, there's always at least one ballad on their albums, and on here you have the epic When All Is Lost, featuring an almost uplifting vocal melody that really just stuck out. This album also retains those moments of pure fist-in-the-air, arena rock choruses as well, something that has been present on the last handful of releases, but tracks like Children of A Faceless God or The Lord of Chaos really exemplify this trait best.
Overall, this is another strong release from this quintet, though I've already seen plenty of people disagree. This is no doubt one of the band's heaviest and most song based, despite being a concept album, record yet and it just works out. Definitely look into these guys if you're into more progressive metal at all.
Overall Score: 9
Highlights: Dehumanized, When All Is Lost, Reign In Madness
Posted by maskofgojira at 10:38 AM