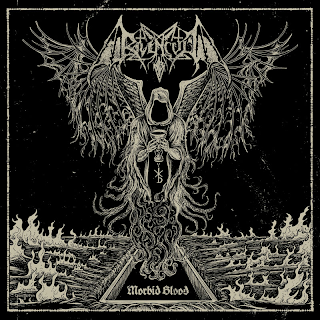 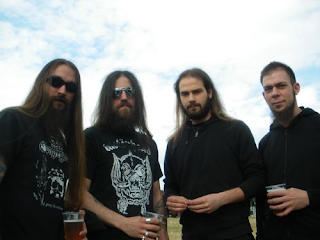 Once in a while it's good to just throw any sort of notions of originality and uniqueness to the wind and listen to something fast and aggressive. Black metal, while constantly moving forward as a genre is also one that stands proud in it's roots. This is where something traditional comes into play.
It's always good to just not care whether or not something's unique to sound good, and just put on some rage music. This album has all the ingredients that make it a fun record, it's fast, thrashy, melodic, and uncaring. Like punk music, this thing gives the middle-finger to any sort of notion that being innovators makes you cool, sometimes just playing music that you enjoy and that provides a good time can be just as rewarding. In case you're wondering, this should signal a huge Motorhead influence on here.
This band's style, at times, reminds me of Watain, and other bands of that ilk, with shimmering tremolo picking, a punk-esque aesthetic, and the willingness to be more thrashy, hear opener Sacrilege of Death or Hail Revenge. I wouldn't go so far as to call this a rip-off, not at all, but you can certainly hear similarities between them. I would definitely say that Ravencult has a much more thrash influenced sound to them, which I think lends itself to being a much more upbeat album, compared to any of Watain's releases. Though at times, this thing does get a bit samey, I don't really hold that against this thing since it's just under forty minutes, just let it pump you up and get you moving. I'm not sure if these guys take this stuff all that seriously, but if they do, they're sure as hell not making it seem like it with how energetic this release is.
Fun, fast, aggressive, and melodic, this is a record to get nuts to, I can only imagine what these guys are like live. This is a great record to just throw on and get nuts to, it's not an introspective listen, in case you didn't figure that out. Pure and aggressive, if you like black metal, check this out for sure.
Overall Score: 8
Highlights: Possessed On A Burial Ground, Morbid Blood, Sworn to The Unspoken Oath
Posted by maskofgojira at 10:45 AM