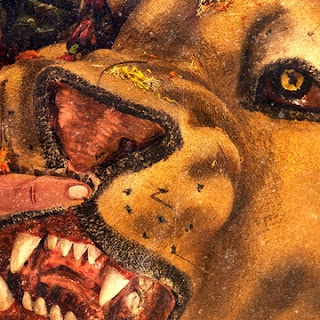 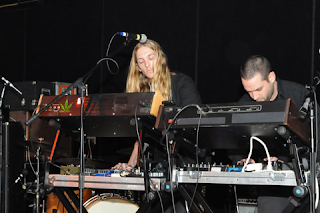 A new duo making quazi-minimalistic noise, sign me up. I'm sure those of you who have been reading these reviews the past few days are probably wondering why I've taken such a liking to the label, well, listen to this stuff, and you'll know why. The mystery of this band will probably be all some people think about, but in reality, the music should be more than enough to occupy those who actually listen to it.
Being a noise artist can be a very tough thing in today's musical climate, if only because most people will automatically assume you sound something like Merzbow. Even though the genre itself has had quite the history before his rise to fame, Ithi is certainly a new group that is going for something more unique, in what seems to be a new wave of noise projects/bands that are pushing boundaries out. While I'm sure some see this new wave as nothing but a bunch of dudes trying to either make noise music more accessible or trying to make ambient, industrial, etc. more harsh and chaotic, but I can say that what's on here certainly doesn't try to do either of those things; but it does certainly make use of all of those sounds in ways that is likely to piss off a lot of people.
I'm sure it's at this point where you're probably wondering, "How is this band any different from any other noise band," well besides leaning a bit more to the Prurient side of noise, this thing is just so much more adventurous than the average noise group, that I've heard. Besides the harsher noise that is obviously at the forefront of most of this album, there is a clear dark ambient element in here as well. This element, while I think it's nothing new for noise and ambient music to intermingle from time to time, what I found with this release was that even though every track made use of the same fuzzed-out noise, a track like Go Forth and Die had a very ritualistic vibe to it, making use of a very repetitive drum pattern that sounds like it came from an early industrial album. From what I've heard, the live debut of this duo featured a more gothic ting to it, which should intrigue at least a few people. I think it's pretty obvious that album closer, From Caveman to Starflight, is the star of this show, turning a rather simplistic and repetitive idea into a very entrancing and hypnotic evolution from an exercise in primal simplicity to experimentation with various noises and samples.
Overall, this is a great record, full of so many great sounds and textures, definitely moving noise into a cooler place. This is indeed, another win for noise music this year. Definitely check this out if you want to hear some forward thinking noise or experimental music.
Overall Score: 8.5
Highlights: Caterpillar Fantasies For Post Larval Life, From Caveman to Starflight
Posted by maskofgojira at 10:25 AM