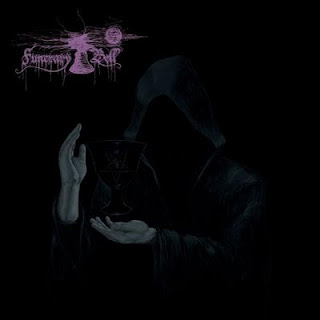 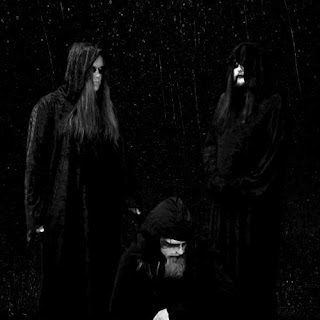 Some old-school black metal is something that I just need to listen to now and again, even if it's by a new band. That old, primal, and very unrefined sound is just something I need to hear every once in a while, and seeing a cover like this, I'm hopeful that it's what I get. This band has released a split with Blood Red Fog two years prior to this release, which is where I first heard of them.
I guess I should have known when I found these guys through Blood Red Fog, they weren't going to be a straight ahead black metal band. Having never heard that split, what I got wasn't so much surprising or disappointing, but different. This has elements of what I assumed the band sounded like, but also things that are much more like Blood Red Fog and modern black metal.
The intro to Vision of The Undead (World) starts things off as if these guys were a depressive black metal band, that sort of clean, down-tempo sound that so many people hate on, but then the sound shifts once the distortion starts. No, there aren't monotonous guitar lines that drift into eternity on here, instead the band try to play a more melodic black metal meets a sort of thrashy/death metal thing. Interesting as that sounds, I think the band are a bit conflicted on the sound they want to achieve, or at least the mixing makes it sound that way. The bass has much louder sound than it probably should and doesn't really fit with the rest of the instruments on here. I think the guitars should have also had a much beefier sound to them than how they sound, it's very dull and brittle sounding. These guys flirt with the whole blackgaze thing, Circle Within Circle, as much as they play around with the idea of blackened thrash, and in my opinion, it just doesn't work. They're trying to make different sounds come together, and at times it works, but other times it just sounds sloppy and unrefined, Conjuration of Thy Majesty.
While I find the principals of the band's sound interesting and original, the performances and songwriting aren't all that interesting and end up falling flat for me. Certainly, this is not terrible, but it's by no means great. Check this band out if you're interested in hearing some black metal with some experimental tendencies, but know that there are better bands out there.
Overall Score: 6
Highlights: Cainian Confessions II, Circle Within Circle, The Coven II
Posted by maskofgojira at 10:39 AM