Dark Castle - Surrender to All Life Beyond Form (2011) 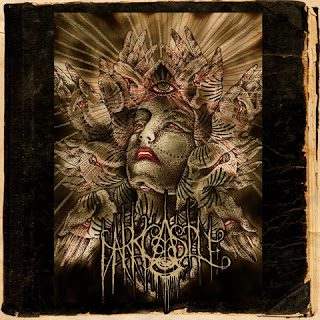 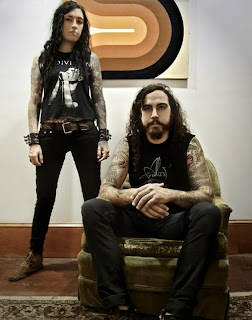 I don't know how many people went through a similar musical evolution I have, so far anyway, where I grew up around metal and around the beginning of high-school thought metalcore was the heaviest thing ever. I remember when Adam D., of Killswtich Engage, was producing almost everything I was listening to, now it seems like Sanford Parker is producing everything I'm listening to. Granted, they are different people and the bands they produce are very different, but it just goes to show how musical tastes evolve.
The only reason I mention Sanford instead of the band in this intro is simply due to the fact that I think he really saved this record. I have yet to listen to the duo's debut album, 2009's "Spirited Migration," though I will eventually get to it, so I couldn't really comment on how it compares to this one. I can imagine that being a duo could really come off a bit simplistic, yet Sanford really just added all these different things to the record that I think really made it so much more than just guitar, drums, and vocals. While that sound is all well and good, Sanford adds that special touch of his, not only keyboards and synthe, but also just the production, which just fits the duo's style. It's raw and sort of live and dirty sounding, but it's also clear and psychedelic, something that is definitely to the band's favor on here, with tracks like the trippy Heavy Eyes.
The band's sound on it's own is, not so much diverse as much as I'd say that it's varied. All of this record stays firmly within the sounds of doom and sludge metal, but within that context, each of the guests on here have a track which suits their particular style, whether intentional or not. From folky-tinged ballads, Create An Impulse, to more experimental tribal piece of Spirit Ritual, the band certainly likes to maintain that same sort of hazy, or druggy, vibe. Unfortunately, I just could get into this record, sadly, cause I really wanted to. While I was listening to this, I just couldn't help but feel like this is just so lackluster, just so painfully dull and lifeless.
I honestly wish I liked this more, because I've loved almost everything that Profound Lore has released, as well as most things Sanford Parker has produced, but this just didn't do anything for me at all. The music on here feels like it wants to be alive, it wants to be played more energetically; the passion, ideas, and collaborators are all here, but I just couldn't get into it. If you're into doom and sludge with an adventurous spirit, definitely look this duo up, maybe you'll get into more than I have.
Overall Score: 5
Highlights: Seeing Through Time, To Hide Is to Die, Learning to Unlearn
Posted by maskofgojira at 11:04 AM