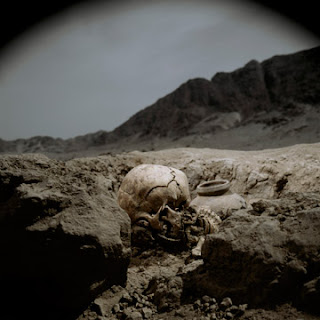 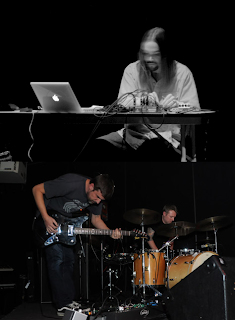 In my opinion, ambient, drone, minimalistic composition, these styles of music work best when they paint a picture with their music. Right on the cover, this album makes a statement that immediately made me take notice. Without even knowing who GOG or William Fowler Collins were, I bought, that's right I actually bought it, this album and threw it on.
It was only after hearing this record through the first time that I actually went and checked out both artist's solo material, and I can now see where this album comes from. This isn't the type of record you go into thinking you're going to have "fun" listening to, the soundscapes on here range from intense and crushing to tense and restrained moments of calm, I can't see anyone putting this on to go driving or even go to sleep, just being honest. There's such a fiery energy in this recording, it never feels like things are just going to slow down into a meditative moment, there's always something bubbling under the surface.
Back to the statement I made above about me loving ambient, minimalistic, drone, etc. music that is able to paint a picture, this does it with gusto. The five tracks on here definitely manage to portray that bleak, heated sensation that comes from a desert. More intense tracks like Fire In The Valley or Notice of Location are brutal and unrelenting, making use of fierce noise-scapes that just set into motion a sense of burning hot sands surrounding the listener, I'm sorry if it's a bit too wordy here, while tracks like Abandonment are more tense and withdrawn but feature a much darker mood to them, imagine someone wandering the desert for days and just collapsing before dying and rotting away. It's a pretty dark album, and concept really, but one that certainly captured my attention.
This is probably one of the most centered albums I've heard all year, and I mean that in the best way possible. There's such a strong sense of portraying a certain thought or idea, in this case the desert, that it really manages to block out any sense of influences or comparisons to other artists. Definitely check this out if you're looking for some cool drone, experimental music.
Overall Score: 8
Highlights: Continuum, Of Ash and Wind
Posted by maskofgojira at 7:53 AM