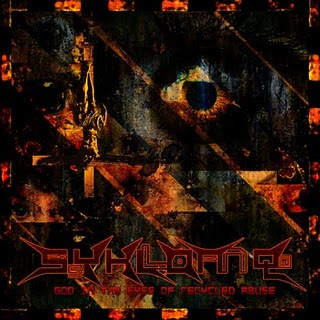 Despite knowing and liking quite a few industrial black metal bands, there really aren't a lot of releases to have come out this year. When I was emailed this demo, I was actually pretty happy to receive it, I was looking for something a bit different. As a debut, I'm not expecting perfection or a lot of originality, but I'm hoping for something cool.
This three song release is an intense little bugger, if you have no preconceived notions going into this, like I did, you will be surprised. While the Intro is pretty insignificant, being only three seconds long, the second track is really where the majority of the band's sound can be heard. God In The Eyes of Recycled Abuse fuses intense, brutal black metal with pulsating electronic beats, distorted vocals, and a thick and rather morbid sounding atmosphere together into a seventeen minute track. In all honesty, while I do think that there's a lot of potential and room to grow in the sounds used on this track, some of the more intense moments remind me of a band like Control Human Delete a little bit, I did think that the more ambient/noise sections did bring a different take to the genre though. The last track, Kvlt ov Nukkklear Holokaust, is definitely the more memorable track, and not nearly as chaotic and frantic sounding, so it may be the best track to start off listening to on here if you're not sure whether or not you'd like this.
This is a very solid first release, like I said, there's a lot of potential in here. While I'm not sure I liked how noisy this thing sounded, that may be part of how it's supposed to sound. If you like dissonant, weird, industrial black metal, look into this demo, you won't be disappointed.
Overall Score: 5.5
Highlights: God In The Eyes of Recycled Abuse
Posted by maskofgojira at 8:10 AM