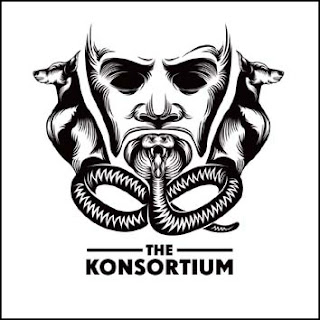 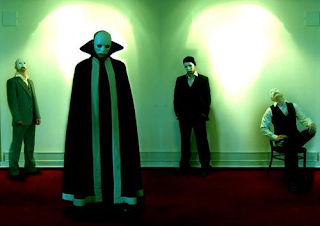 No, this is not a black metal version of Slipknot or bands that wear masks, it's a band that's actually good. I've been waiting for this album for about a year or so, since I first found the band. Besides being one of the weirder bands to come out in the last couple of years, Teloch, of 1349 and Umoral, to name a few, is one of the guitarists in the band.
Now, just to clear something up, that term post-black metal is still very wide, so don't come into this album thinking you'll hear anything like Alcest. Instead, this album retains a much more traditional sounding black metal sound, very aggressive and almost thrashy in some areas. Granted, to say this is straightforward sounding would discredit all of the weird progressive riffs that are used throughout the album. In my head, I hear elements of Dissection, Mayhem, and Emperor all mixed along with more avant-garde and progressive rock like King Crimson in how a lot of these riffs and chord progressions are used. I really have to compliment the vocals on here, there's a great amount of range used throughout, from chanting, Decomposers to be specific, to Ihsahn-esque screams to full-on grunting and even clean singing that brings to mind the likes of Carl-Michael Eide and ICS Vortex. Even when effects are used on the vocals, they never actually affect the actual singing, so no auto tune if you were wondering.
I'll say it right now that I enjoyed this album quite a bit, but I found it disappointing that there were only four tracks on here that I hadn't heard, that means half of the album in this case. Half of this album was released about two years ago on the band's pre-production EP, which admittedly was not as big sounding as this, but the songs aren't that dissimilar. Having said all that, I can't say that my view of the album, as a whole, is really damaged by that. The songwriting is still very good and having some good choruses never hurt anyone either, hear what I've always thought of as the band's anthem, Under The Black Flag for an example. I think it's important that a band should be able, even if the material is older, to write good songs, now that's all subjective, but to me, what's on here certainly constitutes half of the album being released beforehand.
There's a lot to hate on this band for, but there's even more to love about them, in my humble opinion anyway. While I would have liked to hear some more new material, what's on here is still very good and deserving of praise. Definitely check this out if you're into black metal that's a little on the abstract side without abandoning it's intensity.
Overall Score: 8.5
Highlights: Liv Ulven, Slangenes Barn, Onwards! Onwards!
Posted by maskofgojira at 11:35 AM