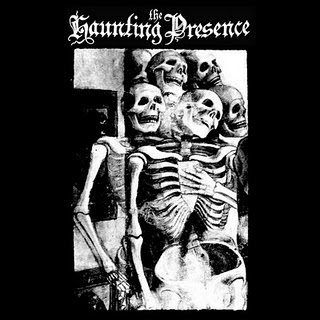 Here we go, another new band to emerge from the Black Twilight Circle. This is the band's first demo tape and it has already been circulating around the internet for some time now, but I've actually heard quite little when it comes to responses to it. It's definitely a little different, but all the bands in the group are different, so I don't know why people wouldn't expect that by now.
Fuzzy guitars, muddled drums, echoing howls, plodding bass, that's what you can expect from these four songs. But to what extent is it different from the other groups in the BTC, well, you can expect a much heavier influence, or at least sonic comparisons, to death and doom metal. There are plenty of different sounds going on in these four tracks to keep them interesting, the Black Sabbath-esque riff on The Unsettling & Impenetrable, the putrid vocals on Obscurity Realms (Ritual of Conscions Destruction), or the feedback that closes The Deity of Anxiety, this is certainly not a boring release.
In the end, while this is certainly a decent first release, compared to the other big names in the BTC, this just isn't as towering. There's certainly plenty of room for this band to grow and expand upon the sound established on here, but for now it's just average for me. Check it out if you're into the BTC or doomy death metal.
Overall Score: 4.5
Highlights: The Unsettling & Impenetrable, The Deity of Anxiety
Posted by maskofgojira at 11:59 AM