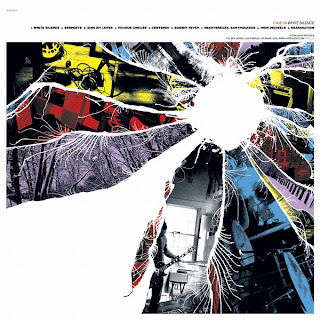 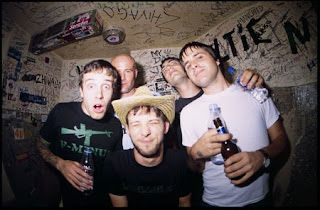 Despite all the good things I've heard about Cave In, how much they've influenced other bands I like, how they were one of the priogentors of metalcore, I've never really listened to them before I got this album. I have been aware of their progression from harsher metalcore, the real stuff, not the melodic metalcore stuff of the 2000s by the way, into more experimental and progressive territory, but that didn't really interest me before now. Despite all that, I'm hoping that maybe this album will get me into the band.
Even though I was well aware of Cave In's movement towards more mainstream sounds in previous album, I was still surprised by how poppy the opening riff of the title-track, White Silence, was, even though the rest of the track most certainly wasn't poppy in the least. That uplifting feeling in the riffs does continue throughout most of the record though. Big anthemic chords that just hammer their way into your head and stay there, think sludge style though, because the band certainly haven't forgotten how to bring the hefty grooves either. Those vicious and brutal, nearly grinding at times, in tracks like Vicious Circles that just make you want to bang your head, that's what I love about sludge metal riffs, that punk infused energy that just makes you want to move.
Personally though, despite the return to the heavy side of their sound, I still preferred when the band added in that more atmospheric and more textural quality to their songs. Tracks like Sing My Loves and Summit Fever just stood out to me because they were able to meld those big grooves with huge sounding atmospheres and nice choruses. Not only that, but I feel like the clean vocals, while they might not be the best out there, they are more than certainly fitting for this band and I feel like they add that little extra something that makes this band different, plus they don't sound like a little girl singing. The likes of Heartbreaks, Earthquakes really blends all of what I just mentioned together, riding itself of most heavy moments, favouring the more psychedelic and space rock sound they were using on their last few full-lengths, comparisons to Deftones have already been made.
This turned out to be a better record than I thought it would be, not that I thought it would be bad anyway, but better than expectations. Definitely some flaws, it's not perfect, but definitely very good. Definitely check this out if you're into more experimental sludge or that early metalcore sound doing something different.
Overall Score: 8
Highlights: Sing My Loves, Summit Fever, Heartbreaks, Earthquakes
Posted by maskofgojira at 9:29 AM