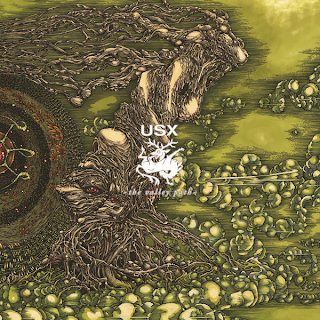 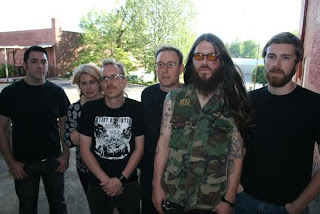 I really wish I had taken the time last year to listen to US Christmas' album "Run Thick In The Night" simply because I would have felt more comfortable with this album. If only for the fact that they're on Neurot Recordings, it should have been enough, but this was my first encounter with the band. To say I was looking forward to hearing my first USX album would be an understatement.
Now, like I said, this is my first USX album and so I can't really compare it to the band's older work, but this is certainly an engaging listen. This thirty-eight minute long track just builds, falls, climaxes, stops, and is constantly shifting around in some way. Imagine a jam rock band applying all the teachings of post-rock, classical music, classic rock, and all sorts of psychedelia into their style and just playing into infinity. It's called space rock baby, and it's alive and kicking on here, taking you to a higher plane and turning your head upside down.
Once I got my copy of this album, it took a while to really grasp. Though this album is by no means a technical or super left-field venture, the length, and different moods and sounds used throughout, make it an album that certainly deserves multiple spins. Sprawling guitar solos, great organ sounds, groovy bass-lines and drums, and just an overarching sense of exploration, what more could you want from a modern prog-rock band. I love how around the twenty-two minute mark the band go into a pretty simplistic part and just get really trippy with it. Vocals aren't used all that often and it really leaves the music this room to just move around into many different realms and ideas, like the more classic rock sounding ending this thing has, totally great.
Overall, this is just a great slab of trippy psyche rock with a pinching for nice epic and exploratory music. Definitely one of the best psyche rock albums I've heard all year, really good stuff. Definitely check this out if you're at all into psyche, space, or progressive rock, you will not be disappointed.
Overall Score: 8.5
Highlights: There's Only One Track
Posted by maskofgojira at 8:41 AM