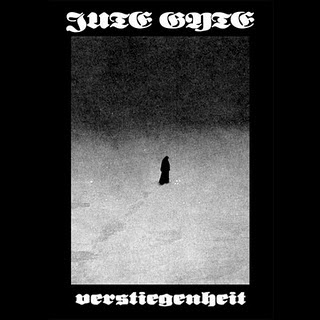 Jute Gyte's "Young Eagle" album that was released last year was definitely a surprising album to me. It was experimental and noisy, but also very unique and odd, setting it apart from the other black metal albums that came out. Despite that, it was only his second black metal release under the project's name, this is his third.
Compared to "Young Eagle," I think it's obvious that the sound has not only matured, but grown a lot more palatable. Gone are most of the harsher tones that covered previous black metal endeavors, and instead you have wretched screams and a much more melodic side. Though the abrasiveness of previous efforts is maintained, I feel like the more melodic approach kind of weakened my own enjoyment of some of what was on here. The vocals also didn't really do it for me, those high pitched wails that kind of remind me of the stuff from the whole depressive scene, it's not bad, it's just not my favorite style of vocals. I think something most fans can agree on with is that Adam Kalmbach should try and get some real drums, or a better sounding drum machine, to perform on here cause the sound is really too tinny and just bad, I seriously thought someone was knocking on my door when listening to Emblem of Fertile Blood and Death but it turned out to be the snare.
Despite me disliking the more melodic sound of this album, I did feel that retaining more sloppy and abstract melodies at times kept this from being too "regular." I might be the only one hearing this, but there are moments on here, The Light That Hangs Above The Fields for example, where some of the riffs sound like something Krallice might do, or another band of that vein. With that in mind, I enjoyed some of the more dissonant melodies and spiralling guitar work on several of these songs, which also retain the length of previous ventures into black metal as well as recall Krallice's tendency for lengthier tracks. I can't say that I follow much of Jute Gyte's other material, since the project has released several other albums that focus more on ambient, electronic, drone, and noise than black metal, so I don't know if do more of that made Kalmbach want to make this more of a focused effort or not, but that's just my speculation.
In the end, I'd say that I probably enjoyed only about half of the tracks on here, though the others weren't bad, they just weren't up to par with how I felt towards "Young Eagle" or other songs on here. Really I think the drums are the biggest thing holding this project back though. I'd still say that if you like some left-field black metal to definitely check this project out.
Overall Score: 8
Highlights: Apparition In The Woodlands At Dusk, The Frailty of Everything Revealed
Posted by maskofgojira at 8:37 AM