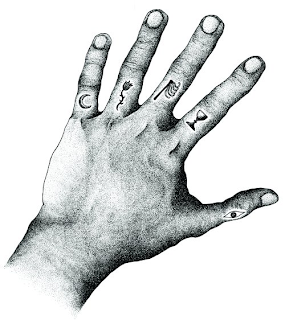 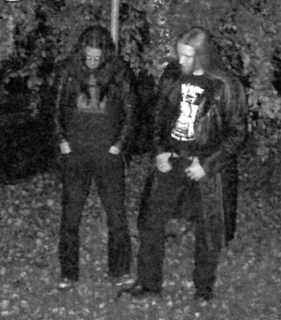 MOTHERFUCKER! Circle of Ouroboros is just one of those bands that's remarkably original in no matter what they do. I'm not going to say every release the duo have put out is groundbreaking in a positive light, but you certainly can't fault them for always pushing themselves. Since I found out about them being signed to Handmade Birds records earlier this year, this has honestly been one of my most anticipated releases for 2011.
In all honesty, going over not only what CoO has done in their relatively short career is tough enough, but mentioning the well spoken of post-punk of Key and the mystical black metal of Rahu, among others, is near impossible to cover without devolving into sheer hum-drum. But this duo has pretty much done everything you can do within the post-punk, post-black metal, atmospheric black metal, doom rock, shoegaze, neo-folk, etc. genres you can imagine, so where do you go now, you take things even further. The little bit of information I had received from others about guitars sounding more like keyboards than guitars on here is one hundred percent true, you will not find another guitar sound like this out there. In addition to that, the melodies these guys have churned out on here is out of this world, the beats are incredibly danceable, and the vocals are probably more tuneful than ever before, in my opinion. I also like how the band have really kept things at a rather mid to slow tempo on here, never really retreading into black metal territory, save a few raspy vocals here and there.
Now, I can't say that CoO have released all good albums, there are some that are a bit more lackluster than others, but there are some fantastic ones as well, last year's "Unituli" full-length I thought was fantastic, even though I never reviewed it, along with their debut full-length, "Shores," and the "Auerauege Raa Verduistering" and "The Golden Blood" splits showcased some really above-par material from them. What has often been a deal breaker for some has been the vocals, and while I can't say that I've ever gotten used to them completely, it's undoubtedly an original style that sounds like no one else; but like I said above, they're a lot more tuneful on here than on any other release I've heard from them thus far. The muddy sounding production has often been what's kept me a little distant towards some records, and it does vary from release to release, while I think the drums are too high in the mix on the "Moonflares" split, I was not a fan of the sound on "Veneration" for a long time. Now, I won't say the production on here is any cleaner, but it's certainly a lot more fitting towards the music.
In all honesty, I expected good things, I haven't always gotten them with this band, but this delivered even more than what I had expected. Damn you R. Loren for releasing another amazing album, you're making other labels look like real lightweights here. Besides that, definitely go pick this up, you will not, I repeat, you WILL NOT find another album, or band really, that sounds like this.
Overall Score: 9.5
Highlights: Every Track Is A Highlight
Posted by maskofgojira at 10:20 AM