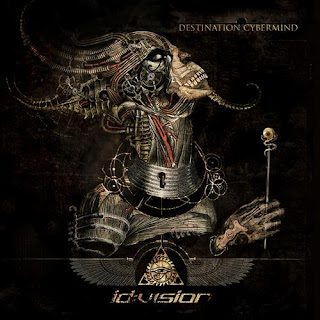 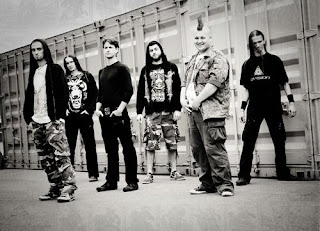 The band known as ID:VISION is one that while I've liked their music since first hearing about them, I can't say that I ever know when a new released has been put out. I was very unaware that this album was coming out, as well as 2009's "X-Ray Sun" EP when that came out, so I always feel a little bad about not keeping up to date with it. When I first found this, I also didn't even remember the band, dumb I know, but I'm hoping that it does live up to the last couple of releases.
Something that I guess has always set these guys apart from other industrial extreme metal bands was the integration of more modern electronic sounds into their own. Those awful trace-esque keyboards that ruin modern metal/deathcore are used on here, but not only used more sophisticated, but also in a more melodic sense, instead of just a substitute for a breakdown. I also have to give it to these guys that they are obviously a lot more adventurous than most of the bands that also make use of these sorts of sounds, making use of more mellow parts, short keyboard interludes and a lot of variety in the vocals.
Despite all of that, there's just something about this record that is preventing me from latching onto it as I have with their past releases. Though I stand by the fact that the vocals are varied, I've said it once and I'll say it again that I'm not a big fan of pig-squeal vocals, and unfortunately their used on here in ways that just ruin tracks like Human Hazard for me. I also feel like the songwriting on here is not up to par with previous releases either, they're not bad, but not at that same level that I would have liked. I feel like a lot of these songs are just not as unique and more simplified than before, and influences, or experiments, that just sound weird are used throughout the album, like the almost J-pop sort of vocals used on the title-track, Destination Cybermind. The simplicity I'm referring to though isn't in terms of structuring though, it's more in the riffs, which recall a very groove-based, almost djent at times, sound that just didn't appeal to me on here. I'm also not all that keen on all the tracks from the "X-Ray Sun" EP being used on here, and changed in ways that actually only made me want to listen to the original versions. But if you're looking for a track that I thought was not only original, but a good song, Vośmy Dzień stood out to me simply because it kind of reminded me of mid-period Amorphis, which is a good thing.
In the end, I felt a disappointed and a little empty after listening to this album, it just didn't live up to the album and EP before it. There's still some good songs on here that are definitely worth taking out of here, but unfortunately a lot of it is just not up to par. I'd still recommend checking these guys out if you're into more electronic influenced extreme metal.
Overall Score: 5.5
Highlights: Eschato-Logics, Pandora's Box, Vośmy Dzień
Posted by maskofgojira at 9:20 AM