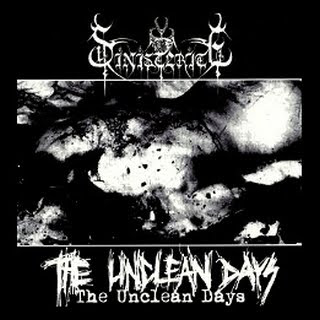 Ah, Mr. Shatraug, what would dozens of black metal bands do without your generous guidance. Though maybe none of his projects are nearly as well known as Horna or Sargeist, to name a few, Sinisterite is probably one of his most underground, at the moment. Though I don't mean to exclude the other two members, Molestor and Nox Irnaed Azzur, I think that most people will know Shatraug than the other two, most likely.
If anyone has ever expected the guitar work and songwriting of Shatraug to ever attempt to explore the realms of progressive or experimental music, I'll just tell you right now that this album would not be where you would find that. This is pretty straightforward black metal with a lot of sounds that call back to early thrash, punk, and even death metal at times. I should also note that compared to the projects of Shatraug I mentioned above, the production on here is pretty minimal and raw sounding, no frills on here, just ugly and unpretentious. The riffs are simplistic, the drumming is primal, and the vocals are harsh and mean, not a good record to put on for your girlfriend at all, unless your girlfriend happens to like raw black metal.
The songwriting recalls the sounds of early Darkthrone and while using a concept more like modern Darkthrone. The punk nature is carried throughout the entire record, very much on tracks like Death & Magick or Piss Off!, but it's just so unflinching and uncaringly brutal to the point pedestrian or barbaric. I don't want to make this out to be the type of record where it's just blasting all the way, because there actually aren't that many songs on here that blast, and there are several which move into a much more doomy pace. The biggest flaw with this album however is, honestly, the performances on here, I can forgive a raw, rehearsal room sound, but there are just some songs that are plainly sloppy and there are clear mess-ups, hear the drum flub on Die When You Die. But I still have to give it to these guys for knowing when to hold back and when to just get in your face, as this thing is very well put together, as a whole, with the entire disc just flowing together very well.
Honestly, this thing is decent, it's not great, but it's still well worth a good listen. I personally prefer the likes of Sargeist and Horna to most other projects of Shatraug, but that's just me. This is certainly not the most original, nor best-written, black metal record of the year, but if you're in the mood for some raw and primitive black metal, this is certainly a good spot to look in.
Overall Score: 7
Highlights: The Unclean Days, Hate At First Sight, Don't Pray For My Soul
Posted by maskofgojira at 8:30 AM