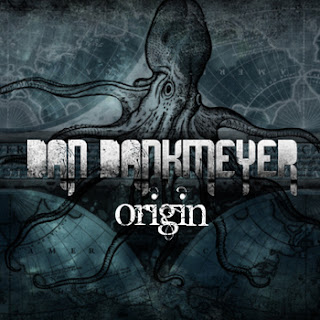 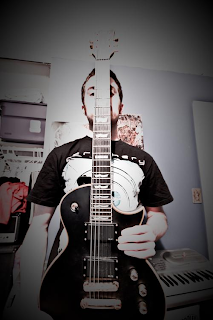 The second full-length from mr. Dankmeyer this year, I'm sure some are saying "It's about time." It's taken me a little too long to finally get to this album, but I certainly haven't been ignoring it. After how much I enjoyed "Arcologies," this was going to have to be one hell of an album to beat that.
Have to say that "Arcologies" was an album that I didn't intend to enjoy as much as I did, despite enjoying Dan's previous efforts, I feel like that album really was a step up to another level. That album made use of soaring guitar melodies as well as some more djenty chugs, but that's ultimately not the same thing that's on here. You can expect those elements, but what's on "Origin" is a much darker sounding album that definitely brings more of a prog sort of vibe to the table. I'd even go so far to say that there's a definitive sense of an epic sounding atmosphere on here as well. Personally, it's the darker sound on here that made me think from the opening of Infectious that this album would be his best yet.
Don't mistake this album for drifting off into a sea of Periphery and Dream Theater-isms, cause while I think we could all find traces of those in even Dankmeyer's early material, and they do remain on here, it was never the focus of a song to show how technical he can play, it was about the song and the melody. For some, I could see you even making a comparison to more modern melodic death metal, and certainly that's a big influence in there, Monochrome for example, it's the two working together that's made me a fan of Dankmeyer's playing style. It becomes apparent within the first few tracks on here that unlike his previous albums where each song was kind of designated a certain role, a melodic track, a djenty groove track, a prog-ish track, etc., the influences has been melded together on here, for the better I might add. I personally rather like the more ambient guitar interludes placed in songs like Escape Yourself, they really add another dynamic to the songs beyond being just heavy and melodic. Now, probably the worst thing on here, for me anyway, was the sound of the cymbals, it was just a little to mechanical sounding for my personal taste, but that didn't ruin these songs.
Though I had hoped for a step from, this is another leap forward in terms of songwriting and arranging for Dankmeyer. It's hard to believe it, but I think this is a better album than "Arcologies." Definitely look out for this album if you're into instrumental melodic prog metal.
Overall Score: 9
Highlights: The One-Hundred Year Storm, Something to Fight For, Escape Yourself
Posted by maskofgojira at 9:36 AM