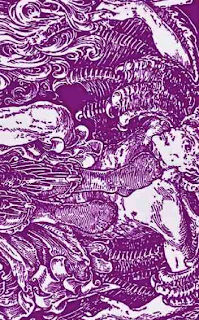 It's weird stumbling upon a new band, and it was really only coincidence that I found this. When I found this short little album, it really intrigued me. There's very little info on this album, and really any of the bands on this label, so pretty interesting stuff.
This album is six songs totalling up to fifteen and a half minutes, quite short to be labeled as a full-length but whatever. What you can expect from this is actually much different than one might think. I had anticipated some pretty straightforward raw black metal, instead, and while it's definitely not polished it's a lot cleaner than I thought, this album is much more original. Within the confines of what could be labeled as a more melodic black metal sounds are elements of psychedelia and almost hard rock, though I'm probably stretching the latter. The riffing is actually quite memorable, Temple Prostitute for example, and the atmospheres are where I get the psychedelic tag from, as they are pretty different from standard black metal, even if the music really isn't. Though, probably only half of this album contains "songs," I'd say even the interludes are pretty entertaining as well.
I enjoyed this album even though I came into it expecting it to be pretty mediocre. While I would have preferred some more songs, or some tracks to stretch beyond the two minute mark more often, what's on here is still very solid. Definitely check this out if you want to hear some raw and kind of trippy black metal.
Overall Score: 8
Highlights: Under Consult of The Dragon, Impurity Flowing Upwards
Posted by maskofgojira at 9:49 AM