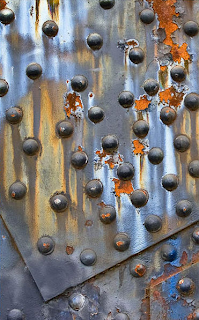 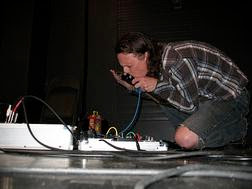 Every once in a while I feel like I should just review something that's totally out of left-field. I'm not talking about the more accessible albums I've reviewed, the more poppy, arty, and softer records, I'm talking about something much more inaccessible. What we have here is, to my knowledge, the first record from Shane, of Crooked Necks, in pure noisy destruction.
Unlike his main project, Crooked Necks, Hostage Pageant's debut if a far more intense and brutal adventure. You won't find melody, you won't find vocals, you won't find any sort of light, just pure sonic abuse. This is a noise album, by way of Prurient style harsh electronics. Feedback, tons of distortion, high-pitched buzzing, hazy soundscapes, Neurapathy, and odd samples, are just some of the things you'll find on here. Don't come into this expecting to hear some noisy drones, cause you will be disappointed if you do, there is little to no droning on here, things are constantly changing and shifting around, which, honestly, can make it a bit difficult to really comprehend. Harsh electronics, I think so.
Personally, while I do find the album to certainly be a brutal listen, I think the tracks that I enjoyed most were the ones that actually had moments where everything just sort of went silent for a few moments. The likes of Resemble Human Form or From Disease to Injury definitely did this, but the use of vocals, Loss of Consciousness, also had it's benefits, making the track a bit more graspable, to a degree. But personally, I think it's the bleakness of this album that I enjoy so much, just the sheer desolate and malicious sounds that come out from all the distortion just kept me listening. At times the electronics almost scattering around like mice, that's seriously what it sounds like on the tail end of side-B, and it kind of, for some reason, made me feel as though right before this tape ended, the music got playful, weird, I know. I think it's rare for noise to really feel, or make me feel to be precise, lively. I know it's odd for a record to be both lively and desolate, but I think that because this was on tape, it worked because the sideA was the darker half while sideB was much more bright.
I know noise music is not for everyone and that most are totally against even calling this music, but it does take talent to make noise that is actually worth hearing. This is definitely interesting, at the very least, and engaging, at best, so it's definitely above average to me. If you're in the market for some sonic abuse by way of intense noise, definitely check this out.
Overall Score: 8
Highlights: Resemble Human Form, Dyskinesia
Posted by maskofgojira at 6:02 AM