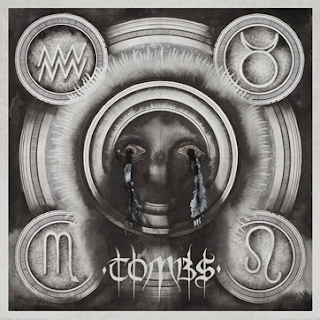 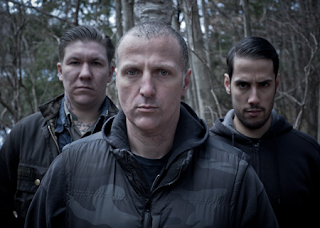 Tombs is perhaps one of the bands that I've heard nothing but good praise for, since their first album, 2009's "Winter Hours" came out. Despite all that praise, even from friends, I remember not really getting into that debut and not really seeing what the big deal is. Now that this new album is out, I'm interested in seeing if I can connect with it this time.
What I've heard so much about is the unique style which this trio uses, the idea of combining black and sludge metal with crust punk and shoegaze music, to me, sounds like a great mix. I like all the different styles individually, so maybe I just didn't give these guys a chance when I first listened to them, cause right when I pressed play on this thing, there wasn't a moment that I disliked. I think the drumming on here is fantastic; it's really expressive and dynamic sounding, but also very energetic and powerful, Vermilion for example is just a track that I love the drumming patterns on. I think that it's also important to note that the bass on here is well performed as well, I like that it's distorted enough to really bring a extra sense of heaviness while not being drowned out by the guitars, it's really thick is what I'm trying to say.
One thing that I just loved on here was the downplayed energy that just ran through this thing, songs like Constellations or Black Heaven, just feel like they could bust at the seams at any moment, go into an almost punk sort of thing, but it's all very restrained and downplayed in a way. There's a lot of texture in the guitar sounds on here as well that I just thought were great, they were nice and chunky sounding, a very meaty tone, but it wasn't muddy or overly distorted to the point where the more shoegazy tones are overwhelmed. Even when this band slows down, Passageways, it doesn't dull the energy, and honestly, I could relate it to post-rock in the sense that in a track like that, it just feels like things keep on building up until they finally explode. The use of the dISEMBOWELMENT style of blasting drums and slow-going guitars, though definitely not to that degree, is something that I also really enjoyed with later songs on the album. I think it's also worth noting that none of these songs feel long at all, they all just blazed by me, in a good way though.
This is just a really solid album that I'm wondering why I couldn't get into this band sooner with how much I enjoyed this. This is an album with a lot of different sounds that could definitely please a lot of different people. Definitely check this album out if you like doom, sludge, black metal, post-rock, shoegaze, crust punk, the list could go on and on, just check these guys out.
Overall Score: 9
Highlights: Path of Totality, Silent World, Cold Dark Eyes
Posted by maskofgojira at 10:19 AM