Canine Court One - The Triumph of The Laser Eyed Caesar (2011) 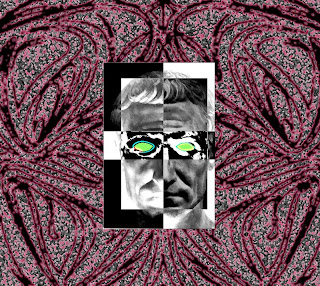 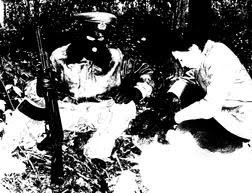 The whole black noise hybrid "scene" has really taken off in the last couple of years, with a slew of new artists realizing it is indeed possible to break the barrier between melodicism and avant-garde composition. These new breed not only break into more unique territories for the genre, but also have a bit of a unique quality for being maybe a bit more private. The more secluded route to which I think a lot of these bands/projects take is one that definitely say more about the music than the people making it.
There is practically no information about this project, leaving the listener to really determine what the musicians are like who create this. The music on here, the this, is certainly not something I could see a lot of people getting into, easily anyway. This thing is noisy, duh, but also very disorienting, uncomfortable, and more than a little dramatic in terms of performances. Imagine a sound that sometimes gets so intense that it literally feels like you're speakers are gonna break from the harsh, blown out distortion, on these songs. This album will make you squirm, if you're not used to this sort of sound, and it's not exactly all that pleasant for those that have listened to the blackened noise and raw black metal scene.
So, what exactly makes up the sound of this release that makes it so demented and crazy sounding? It's an accumulation of many different sides that don't always make sense together, imagine the obvious noise and black metal, then throw in some left-field electronica and drone music, and that essentially gives you a teaser for what's on here. Though each track really goes through various ideas and changes, you can always count on these sounds always being present, from the droning The Constant Pain Hymn to the noise based Cyborg Funeral. It's delightfully primitive in it's approach, no frills or decoration, just pure, blasphemous black metal and noise. It isn't really until the last track, Sleeping Problems where you get a break from all the harsh and intense sonic abuse, with a much more drone and dark ambient sort of sound going on instead of harsh noise.
Is this an album that most people will like, honestly, probably not, but a select few just might. This is brutal and savage, at times enough to give the listener a headache, but that's just me. Definitely a fan of noise and raw black metal, maybe even drone fans to an extent, could probably find something in here they'd like.
Overall Score: 6
Highlights: To The Rainbow Castle, Wasteworld, Sleeping Problems
Posted by maskofgojira at 9:31 AM