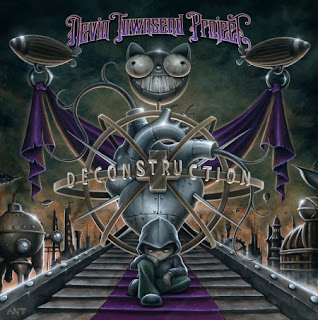 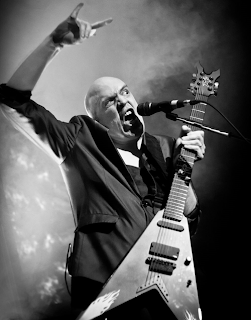 Yes, Yes, I know this has been out for a while on the Internet, but I waited till I could fully appreciate it and till I could hear it's companion as well. This beast of an album really has nothing in common with any other band, it is pure Devin. I've seen reviews and comments from all sides of this one, from people claiming it to be another masterpiece to utter trash.
Depending on what you like about Devin should ultimately impact what you like about this album. If what you love is the experimental nature of his sound, you'll probably like this, if you like brutality and ultra heaviness, you'll probably like this, if you love tons of guests from the upper echelon of metal acts, you'll probably like this, if you like simplicity, seriousness, and the softer side of his sound, chances are this release is not for you. This is definitely one of the man's most schizophrenic releases to date, what the number of guests, the orchestra and choir, and his natural sense for theatrics and taking things over the top, yeah, this is gonna be a duzy of a record. If you're looking for an easy in with Devin Townsend's stuff, this is not the place to start.
Personally, and I'm totally gonna ruin this review here for some of you, I find this to be one of the absolute best things Devin has ever done. It really blends everything he's done in the past with both Strapping Young Lad, The Devin Townsend Band and Project, and his solo work together and just throws in everything he's never done into a blender and this is what came out, elements of black, thrash, death, prog, symphonic, heavy, and doom metal all in one record, how can you go wrong. The production is immaculate, as always, and just full of life, there are moments where you have total metal bursts while other times it sounds more like a John Williams orchestral piece, hear Planet of The Apes, or Danny Elfman film score, Summaria. Now, I'll say this will take time to grow on a listener, cause you certainly will not hear everything on this record on your first listen. I have to say that there are tons of one-liners on this album that are totally awesome, one of my favorites being in Stand, "Some find heaven in sevens and elevens," but that's just me, the epic The Mighty Masturbator has plenty of those as well. That track in particular, The Mighty Masturbator, is also the track where things go off the most into realms of hilarity and is really where the seriousness of the record begins to wane thin, it climaxes in the title-track, Deconstruction, where you basically get a nine-minute long realization that life is nothing but a cheeseburger, but the main character is a vegetarian, EPIC FAIL (then hear the song); but having said that, it's also the track that mixes all of his sounds the best into the prog-metal hat, you even have electronic dance beats in here of all things.
So I suppose at this point you're wondering, is this a good record, to me anyway, well that's hard to answer, there are some points on here where I could only describe what's occurring as genius, while other moments sound like they came off of a very childish comedy album. For all of his faults and flaws, Devin is a human being and he made an album that is one of the few that actually captures that. This is the metal album that describes the nature of humanity in about 70 minutes. So yeah, this is a killer album.
Overall Score: 10
Highlights: Every Song Is A Highlight
Posted by maskofgojira at 10:25 AM