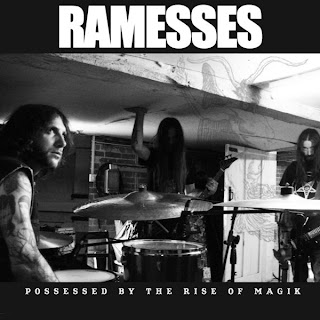 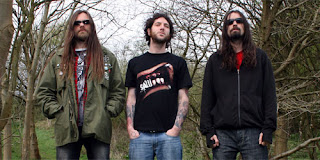 It was three years between Ramesses' debut full-length, "Misanthropic Alchemy," and their second album "Take This Curse," now we have a third full-length, just over a year later. I was actually quite surprised when I found out about this album, because I didn't know the band was working on a new album. Having two members of the great Electric Wizard in their ranks really just makes me wonder why these guys aren't as well known.
The first thing that caught my attention on this record was the production. If you prefer more clean sounding doom metal records, you might be disappointed by the sound that appears on here. The album honestly sounds like that cover art-work, like it was recorded in a basement somewhere, it's a very reverb-y album with a lot of space and atmosphere, but it also sounds very confined and small, with everything sort of bouncing off of walls and back at each other. I find that the production on the vocals, especially, is rather off-putting, and at times even annoying, with how digital they end up sounding.
Musically, I'd say that this is definitely some of the band's most doom metal sounding material yet, a lot of tracks don't deviate and go into new realms as much as their last disc did, so it is a much more consistent album. I don't want to give the impression that the band have abandoned all of their experiments, a track like Duel really brought to mind black metal for the atmosphere that song utilized. Songs like Sol Nocivo and Safety In Numbness really stick to that traditional doom metal sound, heavy, distorted bass, slow-grooving drums, drugged out vocals, and sluggish guitar lines but with all the right intent on their part to write a good song. While some songs on here are a bit spotty, not really going anywhere special and just sort of wander aimlessly for minutes on end, other songs are more focused and expand upon the band's sound for the better.
This album is really a grower, it actually does improve with each listen and the album starts to sound less like it was under produced and more like a really hazy jam. From what I've read and watched on Youtube, these guys are great live, and this album comes a lot closer to that sort of sound than a more polished release. If you're in the market for some drugged-out doom metal, this should be where you go.
Overall Score: 8
Highlights: Towers of Silence, Duel, Possessed By The Rise of Magik
Posted by maskofgojira at 12:00 PM