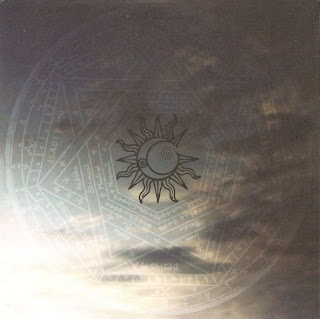 I don't know if I would have gotten more excited about this compilation if I hadn't read that opening statement in the press release for it. That opening line, "Before there was Code, there was Seasonal Code," just got me excited. I'm a huge fan of Code, so hearing how that band started really fired me up.
Now, I usually don't care much for compilations or even live albums, which is why you won't usually see them on here, but just for the sake of this being who it is, and the fan that I am of Code, I felt I had to review this. A compilation of tracks from the three demos released under the Seasonal Code name make up the majority of this disc while two tracks, Tryptych and (A New) Sentiment, are B-sides from the "Resplendent Grotesque" sessions, which was one of my personal favorites of 2009. This nine track affair takes you through atmospheric black, death, and doom metal with hints at what would become the Code of today. In case you're wondering, by the way, the three members during the time these track were originally recorded, because from what I understand, these are re-recorded, Aort and Vicotnik as well as session vocalist Chtonian on three tracks.
While I don't think this has all the elements that made Code the giant, to me, in modern black metal, but shows some distinct pieces of the puzzle. Killer riffs, nice vocal lines, on the tracks that make use of them, cause most of this is instrumental by the way, and a nice slick production are some traits that you can expect upon listening to this release. There are traces of progressive and melodic tendencies that would eventually become much more developed on their full-lengths, but for the demos, I'm assuming that they kept the original structures of the songs here, they're masterfully crafted. The likes of Winter's Clarity show just how experimental and unique the band were even in their earliest days, in my opinion being more successful than most bands at their peak.
This is a great disc, though it might not be as catchy as their full-lengths with Kvohst on vocals are, these songs are down-right good. If you're new to Code I wouldn't suggest starting here, but if you're a diehard fan like I am, this might be a nice addition to your collection. Definitely a good album if you're interested in Code at all, definitely check this out.
Overall Score: 8
Highlights: An Evening By The Reflecting Pool, Lunate Firmament, (A New) Sentiment
Posted by maskofgojira at 8:08 AM