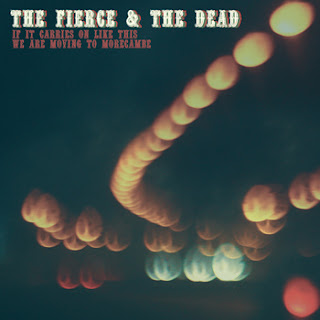 I haven't listened to a whole lot of post-rock recently, and I'm a little sorry I haven't, sorry for me not for others. Sure, I've indulged now and again in the genre, but not enough to really say I've enjoyed a lot of what the genre has produced this year. But when one of the members of this band emailed me about this album, I was like, "It's about friggin' time I listened/reviewed a new post-rock record, god dammnit!"
Now, the term post-rock certainly applies to this band, much less than I had thought it would when I first started listening or from the little bit I had read about them, but it is a much looser term for what's going on in here. Post-rock, progressive rock, dream pop, noise rock, and little hints of other styles can all be found on here, making for a diverse, yet very concise sound. The clean guitars give it that dreamy and more melancholic vibe while the drums and bass are much more upbeat and, dare I say, danceable, hear songs like opener Flint or Part 2. I actually have to commend the bass work on here, as it does play a more melodic role in the band, really creating the main groove that keeps the song going while the guitar plays on top either lead melodies or more atmospheric stuff.
In sense of songwriting, I feel that this trio do a good job at writing short, melodic songs that are much more upbeat, than the usual post-rock songs, mind you I'm comparing them to the bands I listen to here. But really, this might be the trio's biggest fault, with all these more upbeat melodies, it really does constrict the band's style and ability for others to connect with it. Personally, I like it when there is a broad range of emotions within an album, or a band's style, so it adds a different dynamic, even when they get heavy, hear tracks like H.R. or Landcrab for those moments, they still feel too happy or upbeat, I would have liked to have heard a more melancholic song in here. I also feel like some of these shorter tracks, Hotel #6 and Woodchip are still pretty undeveloped, they just present an idea and as soon as I'm getting into it, the song ends, which is disappointing, but the longer tracks do feel more flushed out by comparison.
This album has it's highlights as well as it's flaws, but more of the former than the latter, so I did enjoy this. I have to say that while none of this album was bad, I did feel like it could have still used work. Fans of any of the genres mentioned above, I suggest you definitely look into this band.
Overall Score: 7
Highlights: H.R., Daddies Little Helper, 10x10
Posted by maskofgojira at 12:22 PM