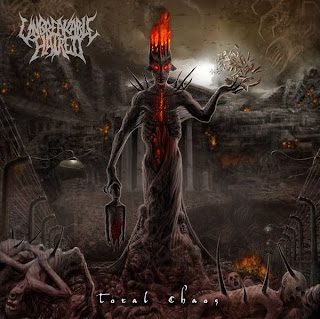 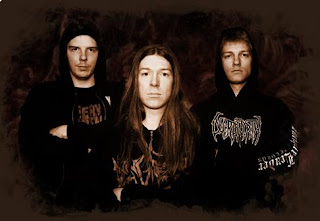 I remember a time when there were boundary pushing death metal acts emerging from Cananda, granted, I wasn't listening to death metal back when they were doing that, but regardless, the point stands. Now all I hear from Canada's death metal scene is all the same rehashed stuff bands were doing in the 90s. The whole tech-death scene really flourished back then, while I don't listen to all that many newer groups within the death metal scene anymore, maybe this one will impress me.
The press release for this band had said that their sound was comparable to early Unique Leader Records bands, which got me thinking of groups like Gorgasm, Deeds of Flesh, and Pyrexia, none of which I could say I'm a fan of. There's a decent amount of variety going on within this band's sound however, they are certainly death metal, but various sub-genres could be applied to their sound, this isn't an all out brutal/technical assault. Unbreakable Hatred really showcases a little bit of everything on the album, from some black metal sounding parts to very technical guitar lines and even straightforward death metal parts, essentially the quintessential track on here. Other tracks are still very good, but simply don't express as many ideas as that track does, even the five-plus minute Years of Violence. The guitar playing on here is great, though not really all that original, his playing on tracks like Anger and Fury really caught my attention, you can tell there's a lot of influences coming in from outside of straight death metal, black and thrash metal riffs are used quite frequently throughout this album as well.
I have to say that the live videos that I saw of this band when they had a lead vocalist, do not match up to how the vocals on here sound. Their former vocalist had more of a metalcore sort style of vocals, no cleans though, while the vocals on here are somewhat more of an early death metal kind of vibe, they kind of remind me of early Vader albums. Having said that, I do find that the vocals are still the biggest drawback for this album, to me anyway, I'm not really the biggest fan of the performances on tracks like Condemned to Serve or Religious Intervention.
Overall, for a debut album, this was pretty good, definitely a lot of talent here. Like I said, the vocals were really the only thing holding this album back for me, but that's an issue others might not even have trouble with. If you're into technical death metal, or death metal in general, I'd suggest you look into this band.
Overall Score: 7.5
Highlights: Total Chaos, Unbreakable Hatred, We Can't Exist In This World of War
Posted by maskofgojira at 10:16 AM