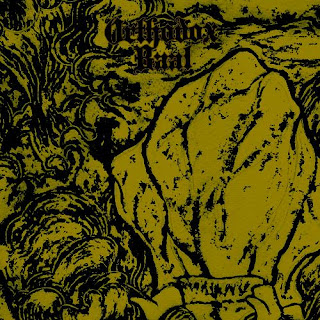 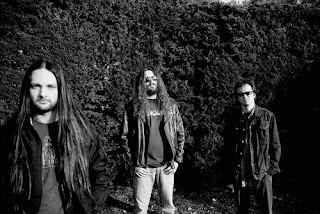 I've had this record for a while and have had plenty of time to sit with it and develop how I feel about it. Orthodox is not a regular doom/sludge band, the trio who've taken inspiration from everything from Earth to Black Sabbath to Ornette Coleman and even religious music, have really been a band that's been willing to stretch the boundaries of the genre. It's only after I first heard this record that I went back and listened to their older stuff, so this was my gateway into the band.
In recent years, maybe even decades, the subject of doom metal has been stretched into a variety of sub-genres, you have the traditional blues-based old-school sound of Sabbath, the droning passages perfected by the likes of Earth and Sunn 0))), and even the more tribal aesthetic of a project like Blood of The Black Owl taking the genre into different places. I would say that Orthodox is a moot-point between those three sounds, it really blends a sort old-school blues riffing with heavy bass drones and very tribal drumming. I don't want people to mistake this as a drone band, because despite its definite influence on this band, it's certainly still a lot more graspable to the average listener than bands within the drone genre.
It's a very earthy sound, not the band mind you, very grounding and definitely good at portraying landscapes and painting a picture when listening to it. I find that despite all its groove, hear a track like Hani Ba'al, it's all quite meditative, though maybe not so much on that track as much as on Ábrase La Tierra, and the low-end rumble really can create a trance-like affect. I find that when the band go into a more extended jam, that psychedelic-trace affect is much more natural, where as a lot of the tracks on here are shorter and more songs as opposed to some of the more extended stuff the band has done in the past. Granted, compared to their last two albums, this is definitely more straightforward sounding and less experimental. I think reverting back to the trio sound has really brought back a lot of the old-school doom vibe where previous albums have made use of more instrumentation to create a more varied atmosphere and sound.
I think this is an album that will take some people a little while to get into, as it did with me, but I still think this is one of the band's most accessible releases yet. The heavy blues guitar playing mixed with the more drawn out playing style is one that definitely got me interested in their older material. Definitely check these guys out if you're into any sort of doom metal, great stuff.
Overall Score: 8.5
Highlights: Taurus, Ábrase La Tierra
Posted by maskofgojira at 11:00 AM