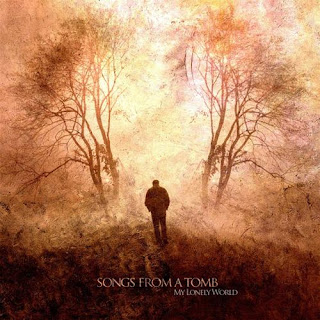 It's always weird when I stumble across an album from an artist I've never heard of before and decide to check them out. In all honesty, it could take me a month or two before I finally get to that album, but it's always those albums that make me question the most. It's an album like this that can make it a great decision to review or one that can just make me want to put my hand to my head and question why I decided to check it out.
Speaking from experience, this is not a typical funeral doom album. The album has a large emphasis on keyboard and organ presence with guitars being used very minimally, if at all, they might be on the title-track, My Lonely World, but it could be keyboard as well. The use of piano and other synthe doesn't do much in the realm of intensity or heaviness, but it definitely gives the album a very wide and spacious atmosphere that could otherwise not be obtained by guitars, hence the ambient tag. The drum machine is very mechanical sounding and really brings an air of gloom to this record with how precise it is, you won't find any crazy drums fills being done, or attempting to be done, it's very straight ahead minimalistic programming.
While the intensity is gone from this record, the atmosphere retained brings a very meditative calm to the entire disc. In some regard, especially for Interlude, there's a definite new age influence on here, with flutes and a highly calming atmosphere. I find that due to this being a much more atmosphere heavy album, as oppose to guitar heavy, this album is no where near as dark or depressing as other bands prove to be. Despite all of this, I found a good portion of this album to be rather ignorable and unmemorable, tracks like Future, Come Back to Me are much more engaging, making use of almost cinematic elements.
I can't say that this was an album that really impacted me, it wasn't terrible, but I can't it was great either. This has very little to do with metal, as I had imagined it might, and more to do with ambient and dark ambient music. If you're into that sort of stuff, check this out, otherwise this isn't a necessary item.
Overall Score: 5
Highlights: Last Emotions, Future, Come Back to Me
Posted by maskofgojira at 9:08 AM