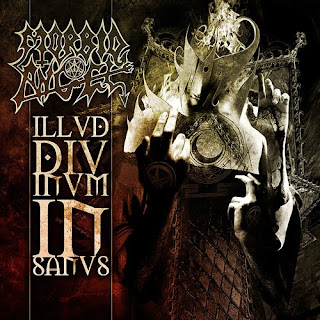 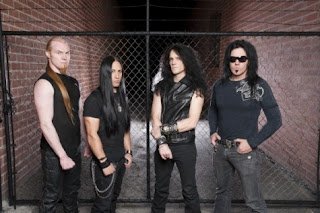 Right here we have one of the most controversial albums to be released this year, what with the eight year gap between this and 2003's "Heretic," and the return of frontman David Vincent, this should have been a no brainer. Sure, I kind of lost interest in the band after he left, and I didn't follow the band with Steve Tucker at the helm, but I was excited to hear what this would be. I expected this to be the obvious death metal album that would take it's place among some of the better released death metal albums this year, I really should have known better.
Before I listened to this album I was aware of what I was getting myself into, I knew David Vincent did bring in a lot of tendencies from his other band, The Genitortures, but I had no idea to what degree he would use them. Now, I can deal with the overblown intro of Omni Potens, I honestly can, it's an intro, but once Too Extreme! opened up with it's pulsating beats and industrial guitar lines, I seriously considered turning this whole thing off. Sure, things do get better with the next few songs, Existo Vulgoré and Blades For Baal are some decent death metal songs done in the band's style, I think the latter track is one of the best songs on the album, but I don't think that it makes up for the terrible opener. The addition of Tim Yeung on drums is great, and the two songs that new guitarist Destructhor brought to the table are some of the best on the album, so if you want to chock it up to new members, that argument really doesn't amount to much in the way of a defense.
I'll say it, the songs on here aren't that bad, even the industrial ones, IE. Too Extreme! and Radikult, they're decent songs even though the latter track sounds like something Marilyn Manson would do. The thing that really just ticked me off, and apparently a lot of other people as well, was that they don't sound like Morbid Angel songs. I don't even think that the idea of combining death metal with martial industrial and hardcore dance music is the worst idea, there have been worse, but what's done on here isn't really a combination as much as just experimentation with styles without even attempting to fuse them together. When the band decide to actually combine the two, the result is halfway decent, with the album anthem I Am Morbid, which, for all it's cheesy nature, is actually a decent song, that is extremely catchy, that is sure to become a definitive live track. Maybe it's just me, but I don't get the twenty-five second blast at the end of Destructos Vs. the Earth/Attack, it's like you have a weird industrial dance song, stop, then blast for the last seconds of it, wtf?! Even if these were great songs, they don't fit with the sound Morbid Angel have established, they don't belong on a death metal album.
I have to say that this is not an awful album, but it's no return to form either, in my opinion anyway. I think the band would have a decent album if those dance tunes were taken off, the death metal songs are quite solid and catchy. I can't say what type of person will be able to get into this, but if you're into electronic music and want an easy in to death metal, I don't see a reason why this couldn't be your gateway.
Overall Score: 6.5
Highlights: Existo Vulgoré, I Am Morbid, Beauty Meets Beast
Posted by maskofgojira at 8:48 AM