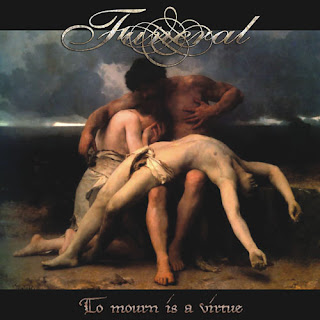 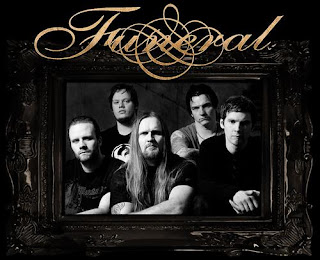 There aren't as many funeral doom bands as well known or respected as that of Funeral, to my knowledge anyway. The amount of quality, starting from the funeral doom scene and moving into a more traditional death/doom sound in recent years, and even collaborating with Candlemass frontman Robert Lowe on their last album, 2008's "As the Light Does the Shadow." This new album is being called the missing link between 1995's "Tragedies" and 2002's "In Fields of Pestilent Grief," since this is all unheard material recorded during those seven years.
In my opinion, Funeral have always been a band that never got enough credit in the doom metal scene, though most funeral doom bands don't, but these guys have always done something different with each album. The likes of opener, Hunger, is just fantastic and shows exactly what this band has to offer, despite the fact that it was on their last album. With this track, the band demonstrate a great sense of melody, that for the genre isn't all that slows, but the vocals in particular exhibit what a darker, and more doomy, Layne Stanley might sound like. Guitar solos in tracks like Dancing In A Liquid Veil and Wrapped All In Woe definitely should intrigue those who actually like that sort of thing, since a lot of it isn't used very much in the funeral doom style. The keyboards on here have a great vibe to them, being very atmospheric, but also adding the right amount of symphonic/orchestral elements to make this sound epic when it needs to be.
Despite any preconceived notions you might have about funeral doom, this album is not only melodic, but catchy and full of hooks. The vocal lines on tracks like God? or The Poison are just spellbinding and majestic. Is it dark, most certainly, but it's undeniable how immediate some of these tracks are, I'm sure people who aren't even all that into doom metal could get into a few songs from here. Just to add if you haven't gotten it yet, almost all the vocals on here are clean. I have to mention that, despite all my praises to this album, it's biggest flaw is that it does feel a little lengthy in spots, I found the last couple of tracks, Blood From The Soil and Wrapped All In Woe, to drag on a little too long for my personal liking.
Funeral is a band that, in my opinion, hasn't released a bad album yet, so I knew what I'd get on here would be good, but by no means this good. This totally blew me away with not only how catchy and melodic it was, but also how it maintained that same darkness they've always had in their music. Definitely check this album out, this is highly recommended.
Overall Score: 8.5
Highlights: The Poison, How Death May Linger, Father
Posted by maskofgojira at 10:48 AM