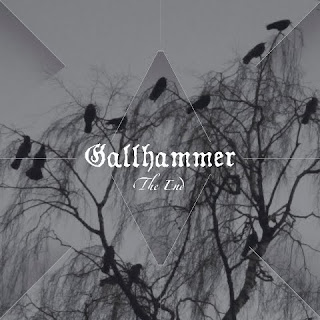 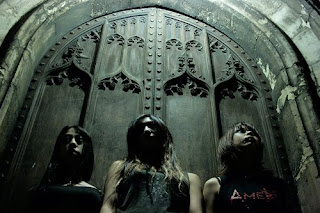 Gallhammer is a group that I've wanted to check out for a little while now. I've heard some pretty good words about them and their sound and how frontwoman Vivian Slaughter is married to ex-Mayhem/Skitlive frontmant Maniac, but I never really payed all that much attention to them. This is my first encounter with them, so I can't say much in the way of liking their past material.
The once trio, now reduced to a duo, has created some of the blackest and crustiest doom metal in recent years. From the little bit I've actually heard from previous records, I have to say that the bass has been turned up in the mix quite a bit. With the loss of their guitarist, the band now have the bass and drums put up front in the mix. This is by far the most doomy I have heard the band, though there are still plenty of more aggressive black metal-esque tracks on here as well, I have to say that the majority of this record is still within the realms of slow and mid-paced. Even during the faster tracks, Rubbish CG202 for example, the guitar is still lower in the mix than the bass and drums, and vocals. I found that during most of this album, the bass was a lot more interesting than the guitar, which might mean more if you're a long time fan or a bassist, but the majority of the guitar playing on here is very lazy sounding and pretty dull to be honest.
While I don't listen to Japanese music all that often, something I've always enjoyed about the music that comes out from the country is it's eclecticism. For some reason what comes out from over there manages to cross boundaries in ways that would never work over in America or Europe, like mixing pop and folk music with death metal, not that that happens on this record; but there's quite a stylistic fusion on some of these tracks, like the morbid doom pop of Aberration and Entropy G35 that is unlike what any other band is doing. Now, while I personally find the more typical blackened doom songs to be more of my cup of tea, the experimentation is certainly commendable.
This is a decent record, some cool and adventurous songs, but for the most part it didn't really do all that much for me. If you're already a fan of the band, you'll probably already enjoy this one quite a bit, but it just didn't live up to my expectations. If blackened avant-garde doom metal is you're thing, definitely check this out.
Overall Score: 6
Highlights: Wander, 108=7, T-NA
Posted by maskofgojira at 7:29 AM