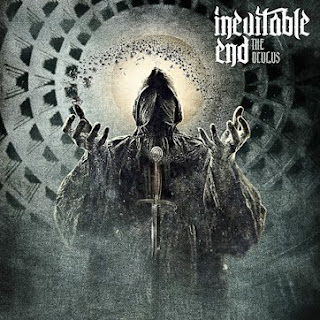 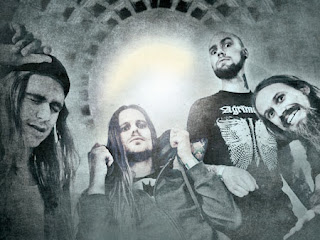 I remember first hearing about Inevitable End while reading reviews in Terrorizer magazine and thinking that it sounded up my alley. That debut full-length, 2009's "The Severed Inception," was a great grindcore/tech-death album that really deserved all the praise it got. I kind of forgot about the band till I read a review about this album, hearing some samples, I was quite surprised by what I was hearing.
I'm not sure what happened to this band, this album is really surprising, to me at least. On their last album, the band could have definitely been categorized as a tech-death/grind band, right from the get-go on here, but band seem to have left that behind for a more spastic and mathcore sound. One could say that it's a natural succession to go into weirder, faster, more technical realms, but once you listen to the two albums, you'll realize that there has been a dramatic shift. Gone are the low and guttural vocals, in their place you have a very obnoxious yell and screaming style. Most songs on here are around the two minutes long with only a handful going over.
Throughout this album, also with spastic playing, you also have some odd sounds thrown into the mix as well. I'm not sure where the idea to put a piano underneath the crazy playing of Zen came from, or the moaning in the back of While Surpassing Either, but they're certainly odd ideas. I did enjoy the use of slide guitar on some of these tracks though, it really added an odd atmosphere to a track like Of Sublime Dimensions. Now, I for one am more partial to tracks that are a bit more groovy, the likes of The Supreme Treachery and Memento being more my speed than some of the short bursts of speed that other tracks exhibit. I have to give it to these guys as well that the musicianship on here is well done, it's very technical for the most part, and very hard to latch onto any real riff cause things are constantly moving, speeding up or slowing down.
I'd say this is a decent album, though personally I preferred the more death metal oriented sound they had on their last album. This is certainly a decent release that will probably appeal to fans of more spastic metal, but it's not really doing a lot of new things with the genre. If you're into really crazy and technical metal, definitely check out this record.
Overall Score: 7
Highlights: Dogmaties Paralies, The Supreme Treachery, Chamber of Apathy
Posted by maskofgojira at 12:33 PM