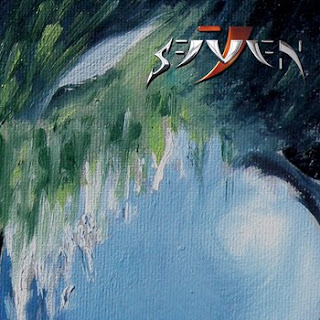 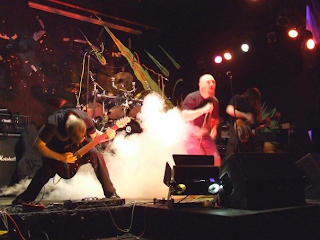 I can't say I've ever listened to Seven7 before being mailed the album, honestly. Looking back I think I might have read a review about their debut, 2009's "Try Something Different," but I'm not exactly sure. Though the genre tag they've been given is pretty non-descriptive, simply due to the broad nature of that the genre lends itself to be, the fact that they have drummer Pete Riley on board, who's drummed with guitar master Guthrie Govan, got me on board.
This thing opened in a way that just ripped my face off, seriously, I did not expect it to open as heavy as it does, The Iceman sounds like something you'd hear from Russel Allen fronting a more straightforward Dream Theater. It has those sort of hard rock qualities melded with plenty of more modern prog metal characteristics, the love for odd tempo-changes and great solos, which probably lends this to being a bit more digestible than a band like Dream Theater. There's also plenty of a more, I guess you'd call it ethnic, influences that bring in some cool melodies, hear tracks like Run. There seems to be a bigger focus on low end on here than a lot of prog metal albums, that I've heard recently, and unfortunately I feel like this led to a bit of sloppiness to the sound of the guitar, tracks like Wannabe and Forgive just sound messy. The latter track features a melody taken straight from Edvard Grieg's Peer Gynt Suite No 1 op 46, which is something I just can't stand, a band knowingly taking a melody from someone else, not the piece itself. I would have liked to have heard the bass a little higher up in the mix as well, though that's just a personal preference as I like the sound of a fretless bass.
I'm really impressed with the vocalist on here, Dave Brown, he really has that Russel Allen sort of sound to his voice, maybe a bit more modern, but more of a that lower and gravely tone. I find that this sort of tone is something that's been lost in a lot of vocalists, in hard rock music of all places as well as metal, and his presence really just adds a very masculine vibe to this record, the likes of You Can Have It demonstrate it perfectly. I don't mean to write off the rest of the band though, as the other three members are more than capable players, but I feel like this more of a vocal heavy album. Unfortunately, I feel like as the album goes on, the vocals move from a great hard-rock style to more of a nu-metal sort of though-guy rapping thing, think Godsmack at it's most generic, which I didn't care for at all.
I'm a little conflicted about this album, because the first half of it is really solid, a lot of good riffing and melodies, but the second half just leaves a bad taste in my mouth. I think I would have enjoyed this a lot more if this was released as an EP, but I feel like ending the album with three songs I just didn't like at all just hurt it too much. I'm sure fans of more modern prog metal could get into this, but the rapping stuff at the end just killed this for me.
Overall Score: 7
Highlights: The Iceman, Run, Under Eye
Posted by maskofgojira at 9:53 AM