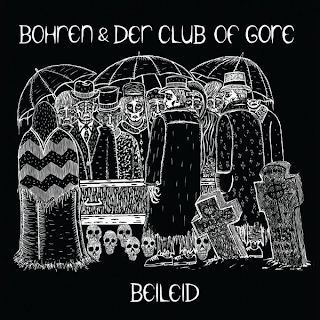 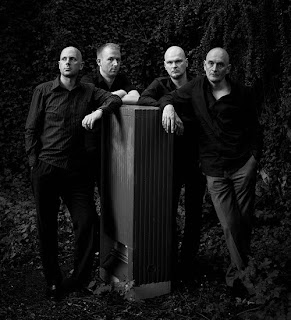 I don't know if it's surprising or not, but I've been a fan of Bohren & Der Club of Gore for quite a few years now. Sure, I can't say that I know everything about them or that I put on their records all the time, but I am more familiar with them than even a lot of the metal bands I post on here. But I have to say that I really dropped the ball on this one, I actually had no idea till a few weeks ago that the quartet had even put out a new album, so my bad on that one.
Yes, in recent years the quartet has moved away from their doom-jazz sound into more dark ambient territory, and that that sound is definitely dominant on here. It's a very minimal and almost smokey quality that links all their efforts together, for me at least, where very sparse arrangements and haunting atmospheres dominate of excessive playing. After listening to metal and rock all my life, it's nice to just hear some ambient/jazz music that retains a similar sort of brooding and dark atmosphere, which is probably why I liked this band to begin with. Those droning sounds that just build up in the background are one of the things that I've always loved about this band, hence my love for the title-track on this thing, Beileid.
Maybe I'm biased, but I've always loved the saxophone lines that have been used in the quartet's discography. Maybe I'm also biased in the fact that I am a fan of Mike Patton and that his appearance on Catch My Heart really got me excited. I thought he did a great job crooning over the very sparse arrangement created by the band. I've read some iffy reviews and comments about this album, saying it's good, not great, and that it doesn't measure up to 2002's "Black Earth," which I would agree with, but it's certainly a very good album. I actually enjoy the darker style on this album than the last two, which I felt were getting to be a little less dark.
Overall, I'd still say this is a good addition to the quartet's discography. It's a much more moody album than some of their past releases, as well as a shorter album as well, just going under forty minutes, a far cry from 1995's double-disc "Midnight Radio." Definitely check this band out if you're a fan of experimental jazz and ambient music.
Overall Score: 8
Highlights: Beileid
Posted by maskofgojira at 12:37 PM