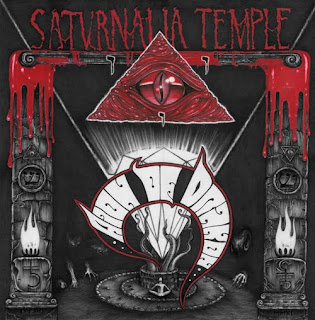 Despite actually being aware of this album, I didn't pay much attention to it until I had read a very favorable review of it. The whole portrayal of the disc as this really occult proto-metal, 70s hard rock sort of thing really got me interested in it. The comparison to riff-master, Toni Iommi, for the guitar playing on here only drilled in the notion that this album has to be awesome.
I don't know if I would ever say that this is a proto-metal, but it certainly has elements of that sound, the whole slow-motion groovy riffs, heavy bass, fuzzed out production, trippy moods, the perfect sounds for a stoner record. Album closer Fall is really the point where I'd definitely say the proto-metal sound is the clearest on this entire album. The grooves are nice a long, sort of jammy in a way, and really hypnotizing, they really draw you in and keep you listening. If you could imagine seeing a doom metal band live, I can imagine that this album really comes close to that sound, it's so huge sounding, but also very tight and bass heavy.
There isn't a whole lot of "originality" in what's being played on a song like the title-track, Aion of Drakon, or really any of these six songs, but the grooves are infectious and the effects are very psychedelic, making up for it in spades. About half of the tracks on this album are over ten minutes, which, for as minimal some of the actual riffing is, is surprising how quickly these tracks just fly by, once again hypnotizing. Even the leads, with their extremely fuzzed out sound, still come across with just the right amount of haziness to make it sound uber trippy. The bass work on here is just great, nice a groovy, fitting right in with the drums, but often going hand in hand with the guitar, and sometimes being more interesting than the guitar, hear Sitra Ahra Ruled Solitary Before Creation for a good example. Really my only complaint about this disc are the vocals, they're not bad, but there are, in my opinion, too many effects put on his voice that don't really do a lot for some of these tracks.
Great, groovy, psychedelic metal that sounds like it came from the late 70s and has been collecting dust for decades before I finally listened to it. Very authentic and primal sounding at times, but always remaining totally focused and centered on each track. Definitely check this out if you're into that early doom metal sort of sound, this will definitely get you in that sort of mood where all you wanna do is smoke and listen to it again.
Overall Score: 8
Highlights: Black Magic Metal, Ancient Sorceries
Posted by maskofgojira at 11:36 AM