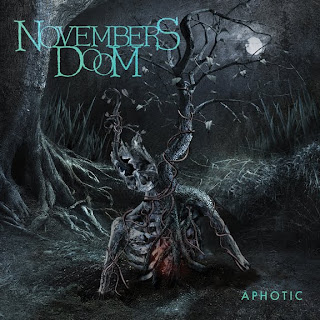 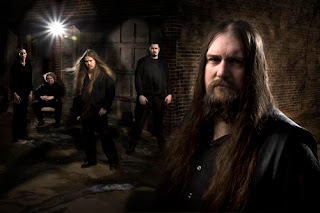 I have to say that when it comes to doom metal, Novembers Doom has been a band that has only gotten better with each album. Even with the shift towards a more progressive death metal in latter albums, they have retained a high level of quality that is not often matched by groups in doom metal, consistency wise anyway. This new album has some guest appearances and is apparently a bit more in line with their past doom sound as well.
The sound of this album shouldn't come as a surprise to fans of the bands last few albums, it's more mid-paced death metal that's plenty adventurous while still being catchy and melodic. I'd say that this album, while some tracks do go for the doomier sound of their earlier material, hear Buried or Six Sides, this album also has some of their fastest material yet, Harvest Scythe, where the band seem to tread into almost pure melodic death metal territory, ala Omnium Gatherum or early Opeth. I still find that the songwriting on here is top notch, with every song on here being very memorable and catchy, but I don't think it tops their last album, in my opinion, 2009's "Into Night's Requiem Infernal." I think the use of more softer passages on this album really does bring a better sense of progression to their sound, it also allows the heavier moments to sound a lot heavier as well.
In my opinion, Paul Kuhr is one of the best death growlers out there right now. He sounds not only unique, but also very powerful and clear in what he says, unlike a lot of growlers; and I also find his singing voice fantastic as well, being more of a baritone singer, his lower register really captures the darker emotions better than a lot of higher vocalists who try and pull of being dark or sad. Guest vocalist include the always stunning Anneke Van Giersbergen on the acoustic ballad What Could Have Been and the great Dan Swanö giving some growls on Of Age and Origin I: A Violent Day. Of the two, Anneke definitely has the better presence on here, her in particular being a great parallel to Kuhr's singing on their duet.
This is another notch in the wall for a great band, not that I'm surprised, like I said above, these guys are great at releasing good albums consistently. Definitely some of their best material on here, but also some stuff that's just average. Definitely check this out if you're in the market for some high quality progressive doomy death metal.
Overall Score: 8.5
Highlights: Buried, Of Age and Origin II: A Day of Joy, Shadow Play
Posted by maskofgojira at 9:59 AM