A Storm of Light - As The Valley of Death Becomes Us, Our Silver Memories Fade (2011) 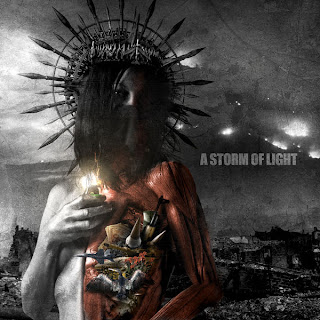 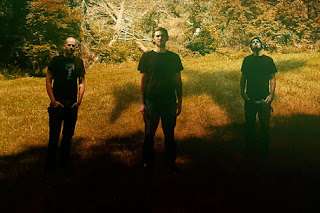 I think A Storm of Light was probably one of the first "post" bands I remember getting into, along with Isis, back in 2008, when they released their debut, "And We Wept The Black Ocean Within." Since then I been a listener of all that they've released, in addition to checking out some of mainman Josh Graham's other projects. I've been putting this release on the back burner for a while, but it's something I really wanted to cover, so here it is.
The approach taken on this record, as oppose to the previous two full-lengths, was apparently to make it a more song oriented album, as opposed to the more drawn out jams usually involved in post-metal. Now, the whole build-up and then fall dynamic that the band made use of in the past is still very much intact on here, you can expect to find songs that are a lot more riff oriented and much more melodic. This record is also by no means a fast record, most songs still retain that doom oriented slowness, but I think it's better showcased on here than ever before simply due to the improvement in the riff department, hear the great riff on Black Wolves. To an extent, I'd say that while being more straightforward, and perhaps more metal in that regard, there's also plenty of hints of grunge in here as well, clearly heard on tracks like Silver. If what you crave is more of the sound that the band have used on their earlier releases, album closer Wasteland should give you that fix, as it's easily the most "progressive" of the tunes on here, keeping very close to the sound of the first two records but still having that more melodic side to it.
This album features numerous guests who, while they all have great places on here, never overwhelm the song. Making use of three different female vocalists throughout the album, Carla Kihlstedt, Jarboe, and Nerissa Campbell all add something different to the tracks they guest on, though they usually back up Graham's vocals, they certainly add something unique to this album. The guest that really stuck out to me, before even listening to the record, was Kim Thayil of Soundgarden, who contribute two guitar solos to the album. But like I said, these guests, along with a few others, don't really take over any one part of a song, they merely add to an already great track. Tracks like Leave No Wounds definitely show that guests aren't needed to make these songs great though, in case anyone had that thought.
This is great stuff, definitely one of the best "post" releases I've heard all year. This is a step up for the band, definitely a lot easier to grasp as well as being quite catchy, but still retaining a good core sound. Definitely check this out if you're into experimental metal and rock music, you won't regret it.
Overall Score: 9
Highlights: Black Wolves, Death's Head, Wasteland
Posted by maskofgojira at 11:08 AM