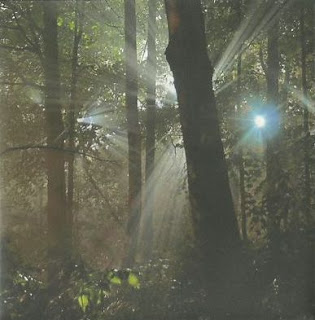 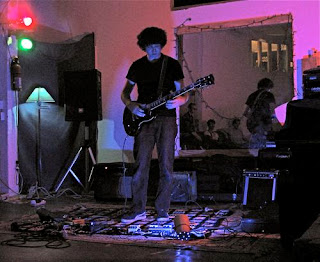 This is a very interesting release, from the cover art, which is what caught my attention, to the little bit of information I found out about this project, it just stuck out. My recent interest in folk music made me want to find something to review while it was the cover that caught my attention. The idea that this music was recorded on a four-track in Dewey Mahood's basement intrigued me enough to want to look into this more.
I'm not really sure what I expected to find from this release, from the live video that I watched of Mahood performing, it was very different from what I think most people would consider to be "folk" music. This is very stripped down, not so much raw, but very minimal, yet very textured, you can tell the different guitar parts apart from each other easily enough, but there isn't so much going on that there's a wall of sound. I don't know if I'd call this psychedelic, at times it does approach that sort of vibe, Clear Lake Highway for example, but I wouldn't say it ever approaches any sort of traditional psychedelic sound. In case this wasn't made clear yet, I think I should mention that this is a guitar oriented album, there are some additional instruments used, some cymbals, vocals, and synthe, but for the most part it's solely guitar based. It's very simplistic in its construction, but can be very effective, as in the acoustic led Shasta Trinity.
Having said all that, I do have to mention that this is a bit messy sounding. The different guitar parts sometimes just sound sloppily placed on top of each other and clash, hear opener The Redwood Coast. The mix on this could have been better as well, with the highs on here being too hot at times and just clouds the full sound. I totally get the bedroom, lo-fi, DIY approach to creating music, but I honestly feel like a better mix could have done this album a world better. At times this also feels like little more than an exercise in wanking off, closer Klamath At Dusk, which is a shame really.
Overall, I'm sort of divided on this thing, half of it is pretty boring, guitar "soloing" while the other half is very well constructed and minimalistic folk/post-rock. The middle of this record is really where it shines, but is bookended by two boring tracks, to be completely honest. If you're into sort of trippy folk sounding stuff, check this out, but do yourself a favor at only get those two core songs.
Overall Score: 5
Highlights: Clear Lake Highway, Shasta Trinity
Posted by maskofgojira at 11:06 AM