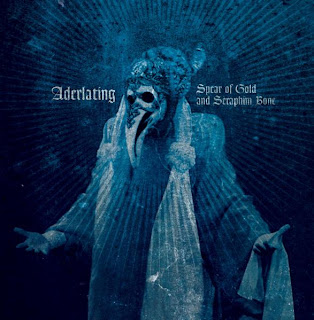 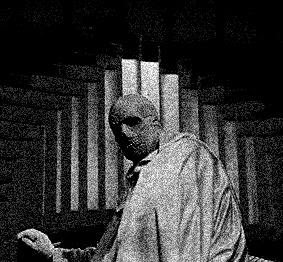 Mories is a man I respect a lot, I haven't met a project of his that I don't like. I'm sure at least some people are familiar with his most well-known project Gnaw Their Tongues, but might not be introduced to Aderlating. This is also the only project Mories plays live with, in which I'm surprised as many people still don't know about this project.
Aderlating is a fairly multi-faced beast when it comes to describing what it sounds like cause each release tends to differ while all remaining in a similar sonic realm. In the past, records have moved through more atmospheric black metal, noise, dark ambient, power electronics, and drone but always keeps the same disturbing ambiance. This album, takes elements from all of those genres mentioned above, and mixes them into probably the project's most ambitious release to date. The title-track, Spear of Gold and Seraphim Bone, is a track that I could see fans of black metal getting into, simply due to it making use of the same sort of brutal atmosphere you might hear from black metal, but without using guitars. The only real time this album bursts into what could be a real black metal section is on Engel Der Wrake, not that I would say the guitar really adds to the intensity of that part though.
I found the use of a drum-set, electronic or real I'm not sure, to really bring a lot more life to this album, where some other releases have to say got to be a bit much with only noise and sounds flying at you at once. The drums really keep things controlled a bit more, reigning in some of the more crazy tendencies of older releases. But I find that even on tracks without percussion, Descending The Naraka I for instance, the arrangement is not nearly as chaotic, which really increased my level on enjoyment. I think the reason why I actually enjoy this project more so than a lot of other dark ambient, mind you it's only one aspect of this project's sound but still, is that there is a lot of different sounds going on, there's always a new idea or sound being introduced into the fold so nothing stays around long enough to get stale. At it's most aggressive it'll remind you of Gnaw Their Tongues while it's most soft and ambient moments can only be compared to other Aderlating records.
I really enjoyed this record, it's probably my favorite release from this project as of right now. I figure a lot of people won't probably be into it simply because this is more "avant-garde," but this is some really killer stuff. I urge you to check this project out, really any of Mories' work, it's all high quality.
Overall Score: 9
Highlights: Spear of Gold and Seraphim Bone, Engel Der Wrake
Posted by maskofgojira at 9:04 AM