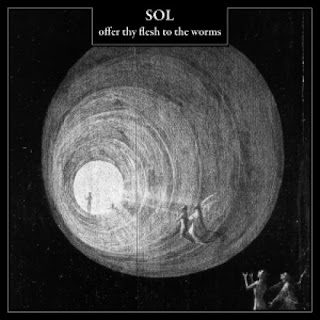 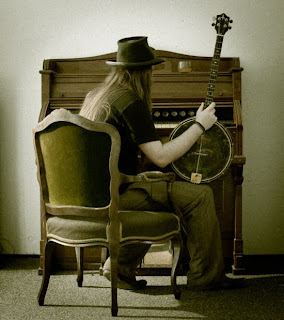 Sol is a project that I only recently started following, like within the last couple of months, after I had heard good things about the collaboration with Blóðtrú. I went back and actually enjoyed their previous two full-lengths quite a bit, so I decided to give this one a go as well. The style of death/doom played by this guy, Emil Sol Brahe, is unlike that of a lot of other guys playing the style.
Unlike his previous efforts, this new album is more of a compilation of older ideas and songs, though there are some newer ones as well, these are all songs that haven't been released yet. Instead of going for the usual death/doom sound on here, Emil forgoes the entire metal sound, for the most part, in favor of writing a more experimental acoustic drone record. It's not a heavy or even emotional, for me anyway, which might leave a lot to be desired if it wasn't so damn captivating and meditative. The only electric guitar you'll hear on here will be on IV, where you have it more in the background, providing more of an atmosphere than anything else. Even on V, which is probably the closest thing you'll get to a drone song on here, is far from being regular. Personally, I actually liked the added instrumentation on here, adding different horns throughout the record really makes it quite a unique one among the dozens of other death/doom bands that just release exactly what their genre makes them out to be.
The composition of these five tracks is more likely to have a place in a meditation hall than at any sort of rock event. The low chanting clean vocals are really, really amazing, in my opinion, and are really one of the things I love about this record, just how direct and unfeeling they sound. The music on here also doesn't allow much light to shine through, so, as you can imagine, it's a very dark and morose sounding record. Due to the fact that most of this is instrumental anyway, it only allows for more of a connection to be drawn to how somber this record is. This album also isn't very long, being just under forty minutes in total, you can really experience each track quite easily.
This is a really cool album, maybe not my favorite doom record, but I certainly enjoyed this album. There really isn't another album out there doing this sort of thing, that I've heard, so this really sticks out this year. I'm sure most fans looking for a "traditional" or "standard" sort of doom album won't like this, but if you're a person with an open mind, you might just dig this a lot.
Overall Score: 8
Highlights: II, IV
Posted by maskofgojira at 11:53 AM