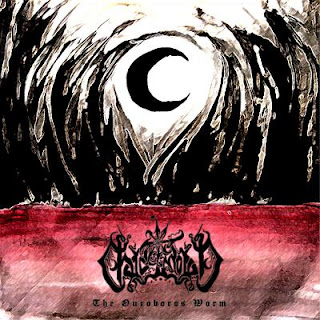 I've known about Chaos Moon for a little while before finally deciding to check out this new release. The good things I had heard about the band from Matron Thorn had indicated to me that it was more of a blackened doom metal sound, while I've heard different things from other reviews. I don't really know what to expect from this EP, seeing as it's my first real listening to the band, so I'm interested in what it ends up sounding like.
After part one of the title-track, The Ouroboros Worm (Head), which is really just an intro, finishes, track two, Processions of Faces opens up with a fairly standard atmospheric black metal sound. I really have to be honest here, these are some of the most passionate, yet terrible sounding, vocals I have heard in the black metal genre, really. They sound like a regular depressive black metal vocalist on the aforementioned track, while they appear to be going for a more death metal thing on the next track, Elder Immortal Shrine, which doesn't work out all that well either to be honest with you, and don't get me started on the clean vocals. Musically, this is decent, each track really expresses a different sound, from more atmospheric to straightforward black metal to even what appears to be progressive at times. While the closer, The Ouroboros Worm (Tail), ends things in a similar ambient fashion as the opener, I can't say I was all that impressed by what I listened to on here.
This was all right, nothing great, it was about average for what's out right now. I thought that the diversity of different styles on here was pretty cool, and the attempt at different vocal styles was interesting, though it didn't always work. If you're into atmospheric based black metal, I don't any reason why this isn't at least worth checking out.
Overall Score: 5
Highlights: Elder Immortal Shrine, Source Balance
Posted by maskofgojira at 9:04 AM