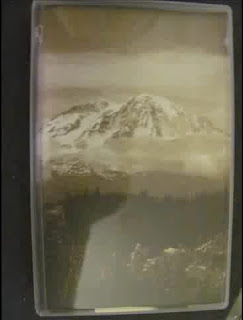 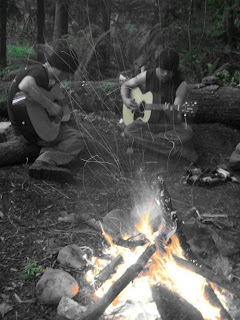 I was pretty excited when I found this record, mainly because I wasn't sure what to expect. Though I do have a copy of the first full-length, the self-titled "Alda," I can't say that I've listened to it more than once. But what made me so excited for this was the different responses I've heard from friends about it, I've heard that it's bad to it's magical.
Coming into this, all I was pretty much going on was knowing that these guys have been lumped into the whole "cascadian" black metal scene. What I got from this album is similar to what I got from the latest Petrychor record, some great folk sections with some harsher black metal ones. The difference between those the two albums being in that I believe that the sound of this album is not only less messy, but also more simplistic. The playing on here is by no means fantastic or original, but it's much more captivating and memorable than that of Petrychor's latest work. The mixing is also a lot more graspable, allowing things to sound much more organized with a clearer sense of direction.
Frankly, I feel like this record is not really all that original, I do feel a much more of the ability to enjoy this just comes from the nature to which it flows. The very natural flow, both in terms of structure and sound, really give this album a very earthy vibe and often feels like it could have been recorded in the woods. I think something that has to be mentioned is the fact that despite making use of tracks that do top ten minutes, not one of these songs felt long at all, making good use of every second. The longer tracks like In The Wake of An Iron Wind and Wandering Spirit have much more fluid style of playing and structure, where folk driven parts and more black metal sections are nicely balanced. Though personally, I feel like Shadow of The Mountain is the clear highlight simply because it's the one track on here that just stuck in my mind so clearly.
I enjoyed this record, more so than I thought I would given the different reactions I had heard from it. Though this is nowhere near breaking any new ground for black metal or folk music, it's performed very well. Definitely worth checking out if you're into more atmospheric and folk inspired black metal.
Overall Score: 8
Highlights: Shadow of The Mountain, Wandering Spirit
Posted by maskofgojira at 11:00 AM