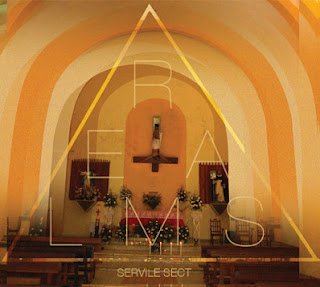 Servile Sect is a band I've read some cool stuff about and have wanted to check out for a little while. Having, previous to this review, heard their last album, 2010's "Eternal Mind," I was interested in what else these guys could do. I am aware that this album has been out for a while, and I plan to review the new one as well, but I kind of wanted to do this one for a while.
I've come to expect that if you're in the market for black metal, or at least a band that has a semblance to the original form of the genre, Servile Sect is not for you. It's hard to really pigeon hole the band as they are so versatile in their craft, melding black metal with elements of drone, shoegaze, ambient, and noise together in ways that are unlike any other group. For the most part their sound, on here anyways, is based out of distorted black metal vocals being done over the styles I just mentioned. Black metal is not performed in the standard way either, with opener Only The Sky Is Gentle is an example where you have black metal being performed by a keyboard instead of guitar.
Each track on here really brings something different to the table. It's pretty interesting to go through each track and really think about what you're hearing, cause everything from background noises and ambiance to over driven guitars and processed vocals are used, to varying degrees of effect, in my opinion. There are some moments on here that make me think of Njiqahdda, hear Burning Season, for some reason, it's interesting and possibly the only comparison I can make to another band. There are moments on here that feel a lot more like post-punk or even new wave music, for some reason to me, and it really brings an interesting mood to the album. Possibly the only "black metal" song you will hear on here is the closer, Universe and Self, Sender and Receiver, which is still far from being a normal metal song, but as close as you're gonna get on here.
Overall, this was a decent album, not my favorite, but still very good. I know I'm not as much of a fan of experimental music as a lot of people are, but I still enjoyed some of this album. Check this out if you're in the market for some weird, psychedelic, black metal.
Overall Score: 7
Highlights: Stabbing Through, The Howling Abyss, Universe and Self, Sender and Receiver
Posted by maskofgojira at 11:44 AM