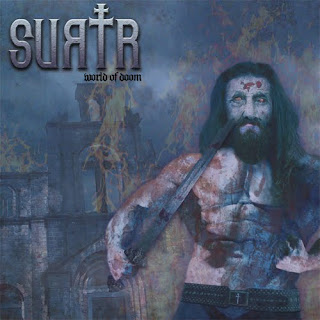 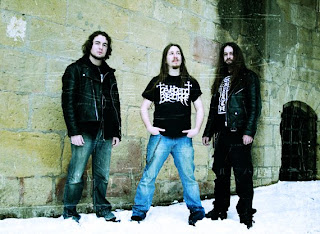 You'd think that with all the bands and projects that guitarist/vocalist Jeff Maurer's been involved in, that he'd explored the doom genre already, apparently not. This is his first, recorded, venture into the territory and has garnered some more attention than some of his other works. While I would normally ignore a doom metal band like this, I couldn't help but check it out as one of my all-time favorite doom metal songs is covered on here.
Ever since the break-up of now legendary Reverend Bizarre, I have been awaiting a band that manages to capture that old-school Sabbath-meets-Cathedral vibe. Now, I'll say that with this debut full-length, these guys don't take that title, but they certainly show the potential to write something cool. What's on here is certainly done, or at least inspired by the bands mentioned above, and the obvious Doom Over The World cover I referenced above, and definitely have more of the bluesy tone mixed with the down-right heaviness that the Reverend achieved. This five song concept, not including the cover, which for some reason was put in the middle of the album, trudges along, showing off a bunch of the trio's influences, whether they like it or not. The few moments on here where the trio decide to break out of doom, the black metal ending to Part IV, really stick out and caught my attention and in my opinion really did make this record better.
While most of this is solid, I have to say that like I said at the beginning, these guys just don't have it with this album to take them to the same realms of greatness that the Reverend did. I know a lot of people are probably going to go, "But this is a completely different band, they don't want to Reverend Bizarre, stop going on about how they want to be just like them," and I totally get that, but to me, the inclusion of the cover and the very authentic sounds from this album just kept Reverend in my head while listening to them. Maybe it's that there isn't as much dark comedy in here or that the vocals just fall flat when they try to sound epic and powerful, which to me is the thing that hurts this record the most, but as of right now, these guys just don't differ from the pack of groups right now trying to do this whole doom revival thing. Sure, some moments on here, like in the middle of Part III, have some more upbeat and fun riffs that just make you want to go out and party, but there just isn't enough of that throughout for me.
Overall, this is a solid debut full-length but not great, it has plenty of penitential though. I feel like the vocals are the biggest drawback on here, but luckily it doesn't hinder the band's sound too much. If you're looking for some old-school doom metal look here.
Overall Score: 6.5
Highlights: Part II, Part IV
Posted by maskofgojira at 8:47 AM