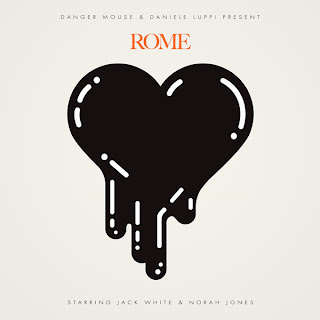 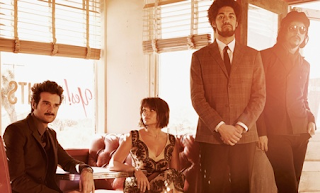 I'm sure some people might be wondering why this is on this blog, well, it's because of what I've heard about this record. From the little bit I had read and heard about this record, it was supposed to be a sort of throwback to 50s and 60s western soundtracks, which is something I enjoy. Besides that, even I have to admit that Danger Mouse is a great producer.
Apparently a tribute of sorts to classic soundtracks scored by legend Ennio Morricone, this was recorded by vintage instruments over several years.The instrumentation definitely makes an attempt to recall that sound of the early spaghetti western scores with very soft and earthy sounds and textures throughout, but I'm not sure it amounts to much in my opinion. Within each composition, there's certainly the vintage sound, but it all just feels so lifeless and hollow to me. Even at it's best, tracks like The Gambling Priest or The Matador Has Fallen, I feel like this album still doesn't really get as great as it probably shot to be, or as big as others have made it out to be. Luckily, most of these tracks are very short and no track ever crosses the four minute mark.
Guest vocalists Jack White and Norah Jones each contribute vocals to three tracks on here, doing their typical style, but like the music, it just feels very empty. Though I can't say I've ever been a fan of either of their projects, Norah solo or any of Jack's bands, I certainly do think they do what they do quite well. In my opinion, the songs that make use of vocals are pretty decent pop songs, they're not bad, but they're by far not the most catchy song you'll hear this year, with tracks like The Rose With A Broken Neck or Black not really doing all that much at all despite making use of vocals. In all honesty, I feel this album could have probably fared a bit better by being an instrumental disc of compositions rather than trying to put some well known guests on top of a few songs. Granted, I feel like the best tracks on here do feature vocals, I think it has more to do with the orchestration being a bit more upbeat and vibrant than other tracks more than the vocals, hear a tracks like Two Against One or Problem Queen.
This album is alright, but nothing to really freak out about. It has some tracks that are decent, for pop songs, I'd listen to these over some of the stuff I hear on the radio or see on tv. If you're into orchestral pop music or film scores, this would be something I'd recommend, but it's not a must buy.
Overall Score: 5.5
Highlights: Season's Trees, Two Against One, Problem Queen
Posted by maskofgojira at 10:30 AM