The Axis of Perdition - Tenements (of The Anointed Flesh) (2011) 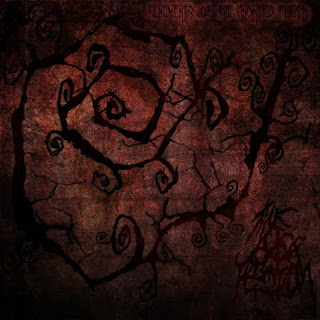 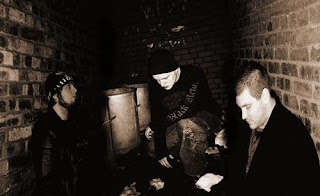 I can't remember what initially turned me on to the experimentalists in The Axis of Perdition, but I can remember the first time I listened to them. Back when 2009's "Urfe" was released, I can recall pressing play for the first time and just being blown away by how different it was compared to everything else I had heard. This new album might not be as avant-garde as the last one was, but from what I've heard of it before hand, it proves to be another new direction.
I'm afraid to say that the more industrial, more dark ambient elements that have really dominated the band's previous work is put back in the sound on this new album, I say I'm afraid to address any concerns people might have about this album, not my own mind you. This album features a more guitar oriented sound, with many more angular and twisted sounding riffs than ever before. Now, while the guitars are more at the front of the sound than before, the elements of dark ambient and industrial textures still remain in just that, textures and atmospheres that engulf this entire disc. I've heard comparisons to Deathspell Omega, and while the two share a similar sense in terms of creating dissonant, atmospheric riffs, The Axis of Perdition feature an almost English proggy sense to them that their French brethren do not have, hear a track like Sigils and Portents. You'll also hear the band's most melodic moments on a track like Ordained, in my opinion, one of the best album closer tracks this year.
For anyone that's actually made it through "Urfe," I believe that this will make much more sense, sonically anyway. The dark ambient, spoken word sound that dominated most of that album really gives way to the more chaotic feel on this one. Though, if you were hoping for another dose of brutal ambiance, The Dark Red Other should provide what you are looking for; but if a craving of brutality is what you want, the two opening tracks, besides the intro, Unveiled and Unbound should give you the fix you need. Later tracks express a more "heavy" sound through a denser atmosphere, in my opinion, and slower, and mid-paced riffs taking the place of the brutality that opened the album. I think this is what makes this album so powerful, the flow of the record really adds to the experience of it, it's not just a batch of songs that have nothing in common, this is a much more well-rounded album with highs and lows.
Overall, not that I had any doubts, this is a great album, definitely another notch for the band in terms of originality as well. It's hard for me to say this is a good starting point to start listening to the band, since none of their albums could be called easy listening, you really just have to jump head first in and try to make yourself comfortable. If you like experimental, atmospheric, industrial, progressive black metal and you like it to sound like it's crawling out of the sewers, look for this.
Overall Score: 9.5
Highlights: Every Track Is A Highlight
Posted by maskofgojira at 9:44 AM