Primordial - Redemption At The Puritan's Hand (2011) 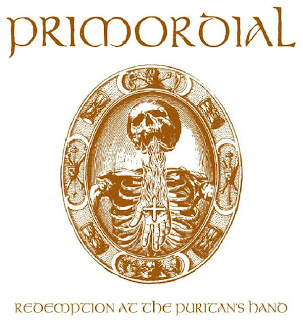 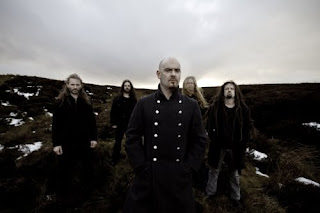 I have to admit, I haven't really been a loyal follower of Primordial as I probably should have been. I still remember fist hearing them on a compilation CD and really getting into that song which wound up being off of "The Gathering Wilderness" album. Since then I've kind of fallen off the wagon and only recently have I gotten back on board, after watching their live DVD and hearing the Blood Revolt record last year.
Something that has always stuck out in Primordial's music was their ability to use folk melodies without being cheesy or sacrificing any brutality. It's easy to follow without being simplistic or dumbed down in any sense, it's progressive and forward-thinking while recalling elements we've all heard before. This is a hard record to really describe because it, and the band really, don't sound like any other out there, and so it's hard to kind of find any real term or description that perfectly captures their sound. When you compare a track like Bloodied Yet Unbowed to The Black Hundred, it could almost be mistaken as two different bands, as the latter is very aggressive and has a more black metal sound while the former takes more time to build and climax.
In my mind A.A. Nemtheanga is really one of the most uniquely polarizing vocalists out there. At times, his style recalls elements of the band's black metal past, Gods Old Snake, but what you'll hear for the most part on here is a very dramatic style of yelling/singing that is unlike any other vocalist, hear Lain With The Wolf for example, I wish more vocalists would be willing to explore a style similar to his. In my opinion, I also find him to be one of the most passionate and informative vocalists, as well as original, out there right now. I also find his lyrics to have a similar tone that the band has, it recalls an older time, but the situations are all very relatable and graspable.
Overall, this is a fantastic record that makes me regret not being with these guys all along, like I said, I fell off the wagon for a little while. This new album has plenty of variety, yet is centered enough to still retain the sound the band have crafted for themselves. I highly suggest you look into this record if you want to hear some highly original metal that explores both light and darkness.
Overall Score: 9
Highlights: Lain With The Wolf, The Mouth of Judas, Death of The Gods
Posted by maskofgojira at 10:19 AM