Seeds In Barren Fields - Sounding The Siren Song In Vain (2011) 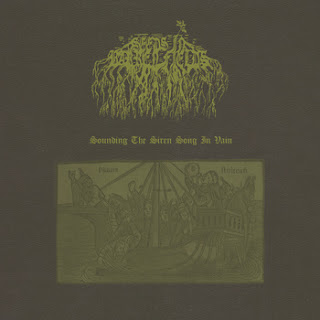 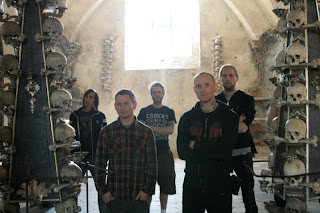 Surprisingly, I've actually been waiting for this album to be released, I say surprising because it's something I didn't anticipate caring about reviewing. This Swedish group caught my attention when they released a split with a band called Peregrine, and I obviously enjoyed their stuff. So here comes their debut full-length, something I only found out about through a Facebook post of all things.
The sound that SIBF bring to the table is a mixture of traditional melodic black metal, dark hardcore, gritty crust punk, and some elements of post-rock. It's a pretty aggressive record for the most part, rarely delving into softer territories, but consistently making each song interesting. Granted, what's on here is still pretty melodic sounding, the riffs are graspable, the vocals are clear enough to understand, and there are some great hooks, which may or may not impact how you view this record. Whether it's the melodic tremolo picked riffs, the occasional breakdown, or the vocal lines, I believe that anyone who likes any of the above genres can find something in here they like, hear a song like Tomorrow Black Birds Fly.
Looking back at the record, I have to say that the only flaw comes in the memorability department, I found that some of the songs on here were just sort of forgettable. I feel like some of these songs could have been shortened a little bit and made into stronger songs, since most tracks are around the six minute mark. A track like Destroy The Machines, the shortest song on here, is probably one of the most immediately memorable and catchy on the entire album. While album closer, I Natten Den Kalla Och Klara, is quite memorable for it's simplistic acoustic guitar lines, it also feels the most out of place on here, simply because it's really the only appearance of the acoustic taking center stage on a track and it just doesn't really fit in my opinion.
Overall, I enjoyed this album quite a bit, it has just enough grit to make it real and passionate. It's the type of record that I hear once in a while and just love the sound of the record, maybe more than the songs on it. If you're into crusty black metal with a bit of hardcore thrown into the mix, don't pass this album up.
Overall Score: 8
Highlights: Sounding The Siren Song In Vain, Pastures of Plenty, Leviathan
Posted by maskofgojira at 9:04 AM