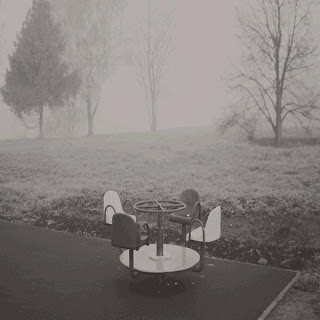 I'd say for maybe a good two years or so I've grown quite the affinity for Justin Broadrick's Jesu. What he's managed to accomplish in past releases encompasses the perfect balance between heavy and melodic. So far, this new album has been pretty much split down the middle, with some loving it and others saying it's nothing new.
It might just be the emotion that Broadrick brings out in the music that I make a connection with, but I can't help just getting attached to an album like "Opiate Sun." That album really hit me where it hurts while it soothed the wounds it carved. For me, Jesu was dark, heavy, and brooding in all senses of the words, but it was also fragile, melodic, and freeing as well. The angelic vocals that were softly sung over crushing waves of distortion has appeared on albums prior and since that EP, but it's only recently that I feel like Broadrick has really begun to gain his footing in the vocal department, though this album does have the vocals a bit farther back in the mix.
If you're asking how this album really differs from past ones, I can say that it hasn't changed all that much. Tracks like Birth Day and Sedatives sound like they could have come straight out of "Conqueror," while others feature some new territory, like the more acoustic based opener, Fools. I'm aware that Jesu haven't always made use of shoegaze, as a dominant sound in its arsenal, but I couldn't help being moved by a track like Black Lies, which to me stood out simply due to the shoegaze sounds. I have to say that I'm a little disappointed by the lack of hypnotizing tracks on here, in the past, I have become totally engulfed by some of Jesu's albums, but with this one, only certain tracks drew me in and filled me with a sense of calm and sadness.
Overall, I'm actually a little disappointed by this release, on a personal level anyway, because I just can't connect with it the same way I can with "Opiate Sun" or "Silver." Musically, I don't see anything wrong with it, some rehashed ideas are used, some new ones as well. If you like Jesu, I don't see any reason why you wouldn't check this out, but if you're new, listen to a song or two and get acquainted with Justin Broadrick.
Overall Score: 7
Highlights: Broken Home, Small Wonder, December
Posted by maskofgojira at 11:50 AM