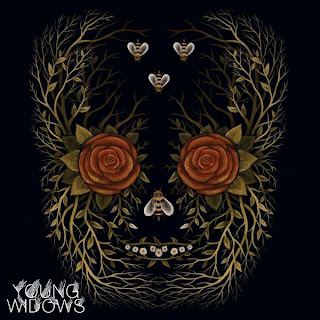 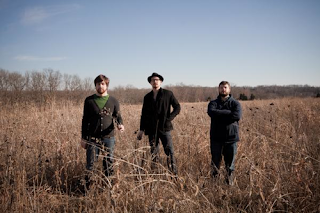 Pretty much since their inception I've heard nothing but good things being said about the trio that is Young Widows. I kind of wish I had listened to them back when I first heard about them instead of ignoring them, than I would feel like I could really speak as knowledgeably as some of my friends who do. So, this is really my first "real" experience with the band as I've only heard a few songs in passing.
I'm not sure if I've ever said this in a review before but I love a band, or album, that has a great bass tone. The sort of rubbery and bouncy sounding bass that works well in both heavy and mellow parts is something I would honestly like to hear more of in music in general, but is sadly resigned to very little of what I actually listen to. This band, if you haven't already figured out where this was going, has that great tone and is used greatly, it really just grabbed me by the collar and made me bounce along with it. It may come as a surprise that bass is much more dominant on here than the guitar is, with guitar lines coming in more so as to reinforce a part or to add a little extra flavor to a groove.
I found it actually hard to take this seriously while reviewing it, in the sense that the sounds coming from this album are just so fun compared to almost everything else I've ever reviewed I couldn't help but just smile at some points, In and Out of Lightness. A lot of these song just carry themselves with this sense of coolness and almost swagger that just really prop this album up. The energy is always going, much like a punk album in a lot of ways, but is a lot more controlled and focused than a lot of straight ahead punk bands are, hear a track like Lean On The Ghost or Miss Tambourine Wrist. I don't really know what it is that makes this album just so passionate and fun, but I enjoy it.
This is an album that definitely has a lot of great songs, not so much riffs, but songs. There's just a lot of really great tracks on here that just got stuck in my head. If you like your rock music with a nice dose of experimentalism and groove, this should be high up on your priority list for music.
Overall Score: 8
Highlights: Future Heart, Miss Tambourine Wrist, In and Out of Youth
Posted by maskofgojira at 10:03 AM