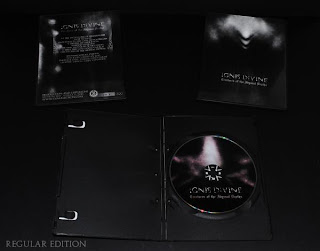 Time for another dark ambient album, but a little different than the last one. Yes, I'm sure some people don't care for the genre, but it has its place and is worth just as much time as other styles. It's interesting to me how ambient records can sometimes have more metal sounding record titles than metal bands.
What I tend to think of dark ambient music is, is what you'll find on here. There's no real track on here that attempts to sound bright or full of light, only dark atmosphere with mechanical noise in the background or haunting Gregorian-influenced chanting. The few moments where a more calming sense appears can be heard on a track like A Dream of Liberation, where the sounds are much more entrancing and almost melodic. I found that different tracks also had their own qualities to them, where it wasn't just a similar sounding vibe on each track, the swirling synthe on Nascent Requiem really differs from the simplicity of the opener, At The Propylons of Shambalah, or really any other track.
Unlike a lot of other dark ambient music that I've heard, there's a real emotional weight that this album carries, with a track like Entrance to The Gate Down Below really sounding massive and dark. Each track on here carries with it something unique and whether that's a more mechanical/industrial vibe to it which adds a much more eerie or a much more authentic ambient calm. I did find that the last few songs on here didn't carry the same weight as earlier tracks, but contained a much more melancholic vibe than earlier ones, so trade one for the other.
Overall, I thought this was a cool album, full of lots of interesting ideas and sounds. I have to say it again, when I think of dark ambient music, these are the sounds that usually come into my head. Definitely check this out if you're looking for some dark, atmospheric soundscapes.
Overall Score: 7.5
Highlights: Dust to Dust, Nascent Requiem, Where The Sun Cannot Reach
Posted by maskofgojira at 11:05 AM